The Dodgey Donut Shocka (kind of) reviewed today is not the only version of the character available. He showed up again in Series 2.

Mad and Moldy and ready to roll into combat, Dodgey Donut is one unclean marine! With his battle cry of "DONUT SURRENDER", he'll take on any bug 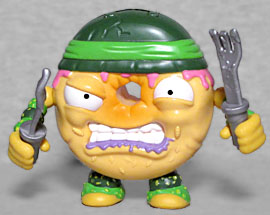 with just a knife and fork until his opponents end up in bite size pieces! Rude, crude, and barely food, it's time for a dirty battle.

The theme for Series 2 was "Bug Strike," and had the foodstuffs dressing up like soldiers to battle bugs. So rather than being a plain doughnut, this one is wearing a green military helmet, and the cake rings on his arms and legs are now shades of green as well, suggesting camouflage. Pink icing leaks out from beneath it, and what was once green goo around his mouth is now purple. Grubs still crawl over his body, but while his arms are the same length as before, the legs are very stumpy - less than half the height as before. 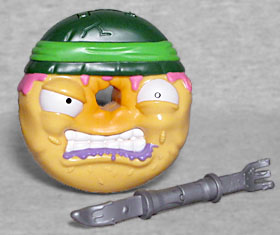 That's because this one has a play feature. Hinge open the body, and you can fold Dodgey Donut's arms and legs inside his body so you can roll him over the bugs. Since Dodgey's construction precludes the "removable head" feature that made the first series so fun, this is a clever replacement. The figure also includes a knife and fork as accessories, and the two can be plugged together into one longer weapon, which is also just the right diameter to fit through the hole in the center of the doughnut, making him more dangerous when he rolls. 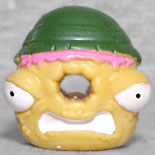 The set includes an exclusive rubber Grossery, redesigned to match the Bug Strike look: there's a green helmet molded on top. It's got an angry look, contrasting with the normal release's look of gormless confusion. Unfortunately, it's slightly too large to fit inside the hollow shell, meaning you can't have him driving the bigger figure like a mech suit. Shame!

"Bug Strike" Dodgey Donut is okay. The plain one's nunchurros are more creative than this one's flatware, and it also doesn't suffer from being molded with a military helmet on it. The colors are generally better, too. However, the fold-away limbs are a fun feature, fun enough to make this one worth getting even if you already had the first. If they'd had this "Fold n' Roll action" idea when the first series came out, that would have been the best of both worlds.

This entry was posted in addendums, blog exclusive review and tagged Grossery Gang. Bookmark the permalink.