Dracula was the first of the "big" Universal Monsters movies: like, the top tier is Dracula, Frankenstein, and the Wolf Man, with the 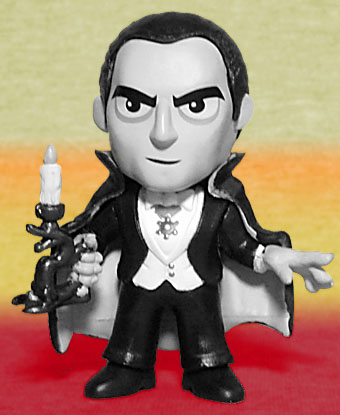 Gill-man and Bride of Frankenstein beneath them, the Mummy and the Invisible Man below that, and then all the other randos like the Metaluna Mutant or Quasimodo. So while there were some "classic" Universal horror films in the '20s, it was Dracula, released on Valentine's Day in 1931, that really kicked things off.

This Mystery Mini shows a friendly, welcoming Count Dracula: he's wearing his cape and his tuxedo, and is carrying a dragon-shaped candlestick with a lit candle burning in it; basically, this is "listen to them - children of the night" Dracula, welcoming Renfield to his castle - his left hand is even held out to gesture at the unseen wolves howling in the distance. Technically his left leg should be higher than his right, since he'd just turned around on the stairs, but then the Mini wouldn't be able to stand, would it?

There are two Draculae in this assortment: this one, which is 1:6 and thus 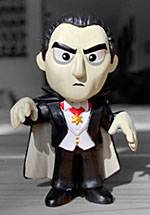 in every case twice, and a more threatening 1:24 version with no candle, a sterner expression, and his hands posed to attack. The same ones are available in the normal color releases, just as they are in this Walgreens-exclusive b/w set. Neither of the molds looks very much like Bela Lugosi, suggesting the likeness rights that keep more realistic figures from bearing his face are still in play here (after all, the Mummy manages to look like Boris Karloff, even beneath the makeup). Amusingly, however, they do manage to resemble Carlos Villarías, the actor from the superior Spanish-language Drácula, filmed at the same time as Lugosi's version. Now there's a version that's never had a toy!