This isn't part of the Horror Classics or Science Fiction Mystery Minis lines, but honestly, he could fit in either.

This comical-looking chump is Stitches, a World of Warcraft character. No, there aren't specifically WoW Mystery Minis - like NECA, 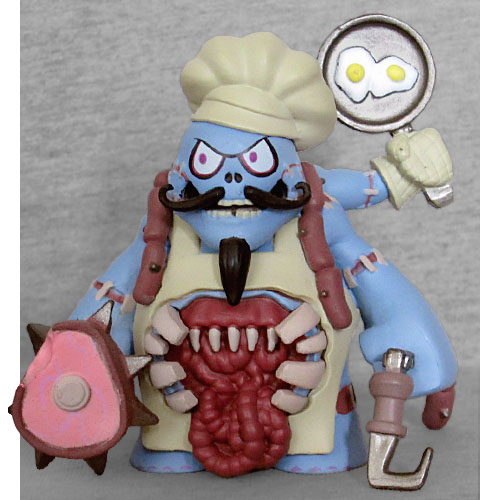 Funko went for Heroes of the Storm, which is some kind of... Super Smash Bros.-style team brawler or something? I don't know. The point is, it's an excuse for Blizzard to throw all their original properties into a blender and make them fight. Warcraft vs. Starcraft vs. Diablo, with all sorts of violent punching.

Stitches is a level 23 elite named abomination found in Duskwood, and if you play WoW, that probably all means something to you. For the rest of us, he's some sort of gross Frankenstein flesh golem created by a necromancer to threaten a town. He's also apparently a knockoff of some character in another game.

The normal Stitches figure takes his standard design and gives it the usual Mystery Minis chibification. But Heroes of the Storm is a "freemium" game, and so it has a lot of alternate skins you can buy. For instance, if you're willing to pay $10 for 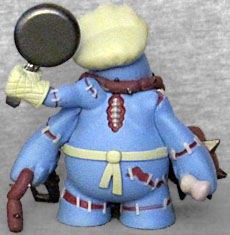 something you won't actually own, you can make your Stitches look like a chef: tall white hat, apron, all that. He even gets a silly mustache and pointy goatee, to make him extra Frenchy. His apron has a gaping hole in the front, allowing his ribs, guts, and... stomach-fangs(?) to poke out. Even his weapons get makeovers: the cleaver he hold in his right hand becomes a giant ham hock with metal spikes and a bite taken out of it; the hook in his left hand is now on a string of sausages rather than a chain; there's another string of sausages draped around his neck (again, with metal spikes poking out); and the sickle he holds in the little arm that comes off his back is now a frying pan with two eggs in it, and he's wearing an oven mitt. There isn't a single piece of Chef Stitches that's the same mold as the regular version. 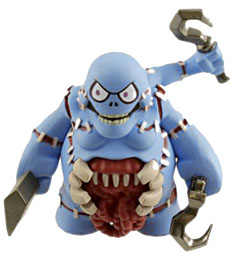 Honestly, I would have been happy with either version of Stitches, but I wanted the chef one more - it's silly fun. And while the Heroes of the Storm Mystery Minis are blind-boxed just like everything else, they're also evenly packed: there are 12 figures in the series and 12 boxes in a case; with no chase figures, you're guaranteed a full set if you buy a case. And since Stitches is one of the biggest, weightiest figures in the lineup, it's easy to figure out which box has him in it.