Horror Month may have been totally hogged by the black-and-white Universal Monsters, but they're not the only deeply iconic horror characters released this year. 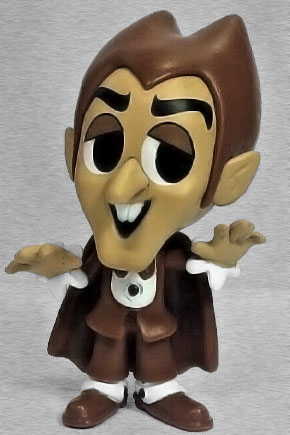 In 1971, General Mills debuted a new cereal, and with it, a new cereal mascot: Count Chocula. Count Chocula (the cereal) was the first chocolate-flavored cereal ever put on the market; Count Chocula (the character) was created by General Mills' ad agency, Dancer Fitzgerald Sample - specifically, by copywriter Laura Levine - and was drawn by George Carn, who'd also designed the Trix Rabbit. These days, he's voiced by Larry Kenny, the original Lion-O, doing a secondhand Bela Lugosi impersonation (continuing the pattern set by original actor Jim Dukas).

Choc (whose first name, according to lots of places around the internet that cite no kind of actual sources, is "Alfred") is wearing old-fashioned clothes, with a brown tuxedo and cape, a white shirt with frilly sleeves poking out at his wrists, and white spats. 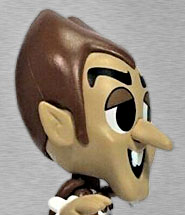 His brown hair comes up into two inexplicable points, which almost feel like they influenced Gary Oldman's hair in the 1992 movie. Or maybe Wolverine. He has pointy ears and two sharp fangs in the front, like Nosferatu, and a chin that suggests his "count" title means he's actually descended from the infamous Hapsburg line. Because of how large his nose is, it's a separate piece that has to be glued into place. He's posed holding his hands out before him (like another vampire we could mention), and the eyes are painted so he's looking off to the side. For some reason, there are two of him in every case.