They say there are no new stories to be told, 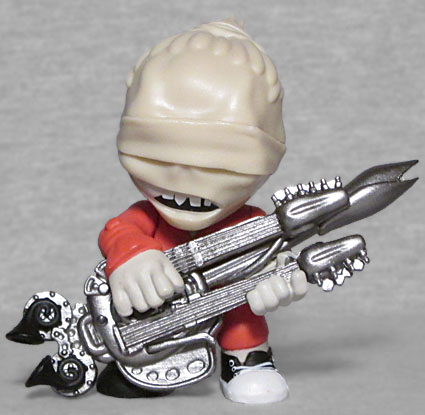 just variations on the same things. That may be true, because Mad Max Fury Road's Doof Warrior has the same origin as Pokemon's Cubone: he wears the skull of his dead mother over his face. Not since an episode of Green Lantern: the Animated Series and an episode of Game of Thrones had the same ending have such disparate properties had such a strong yet unexpected overlap!

There are two Doofs in the Mystery Minis line, and despite what the back of the boxes claim, neither of them are available in a 1:12 ratio. Fans have gotten together to crowdsource the math, and the Doof in this review is apparently 1:36, while the variant (which shows him unmasked and with a gout 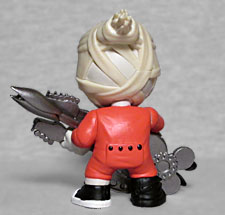 Like all Immortan Joe's War Boys, the Doof Warrior has chalky white skin. He wears red longjohns with a butt-flap, but his mom-mask should really be a bit darker than it is here, to more clearly set it apart from his own skin. His guitar is remarkably detailed, with its two necks and its flamethrower and its body made from a bedpan. It's all silver, with only a slight few black apps to break things up.