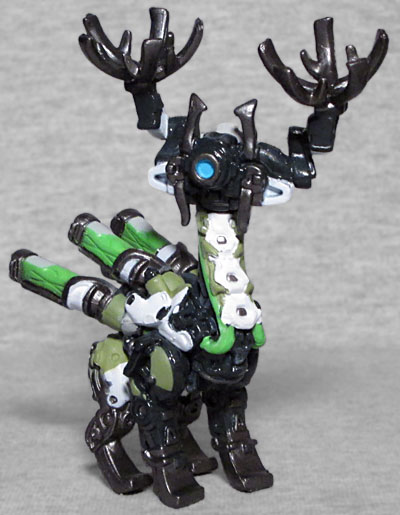 The debut trailer for Horizon Zero Dawn made it look like "sexy cavegirl vs. robot dinosaurs," but that's not strictly accurate. Some of the robot machines aren't dinosaurs at all! Today, we're looking at the Grazer, an "Acquisition Class" machine designed to wander around and munch on grass. Like if Roomba made a lawn mower. And it then evolved to become an animal and not just, like, a disc. Grazers generally flee when spooked, but are capable of a gouging attack with their horns before running - they're deer! Or elk, maybe, but then they'd probably be a little bulkier, so yeah, deer. 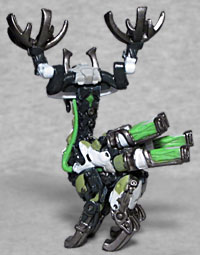 The Grazer fits HZD's aesethic perfectly, with an interior structure of gunmetal grey covered by white armored plates (most visible on its long throat). It has a single blue eye in the center of its "face," and a small pair of horns in front of its giant rotor-blade antlers. Its four little feet are bunched close together. The front legs are straight, while the back legs have more of a bend to them. Green tubes run along the sides of the neck, probably feeding the pulped grass it consumes into those four canisters on its rump. Nice work painting those, by the way: there are white patches near the upper corners, making them look like they're full of liquid, rather than just being green items.