Hey, look, it's Barbara Gourdon! With a U. That makes her fancy. 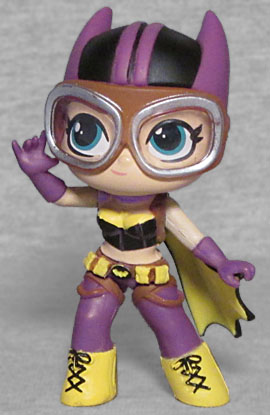 It does not, however, make her British (despite Britain's weaird proupensity for audding extrae vouwels to wourdes). In fact, she'd probably be exceedingly insulted by the insinuation, because she's French. As authentically French as Jean-Luc Picard! You already know all about her, because we reviewed her action figure, and filled you in on her story there. Mostly.

Babette is dressed just like the art: a purple flying cap with little bat-ears poking up off the top of it, a pair of goggles protecting her eyes, purple neckerchief, a black bustier with purple piping and a yellow bat on the chest (which blends into the toy's skintone, honestly), a yellow utility belt with brown straps hanging from it, purple pants, and tall yellow boots. She's posed holding her parachute/cape out to one side, and her right hand is reaching up to adjust her goggles. They're actual clear pieces fit over the painted eyes beneath, which looks really good on a toy this size! 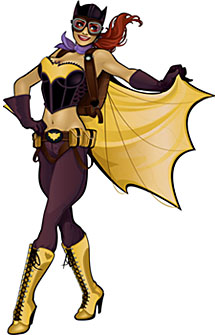 Since the comic has ended and the toyline seems to be well and truly over, we're going to give you a bit of a spoiler that was specifically avoided in the full review - one that could have been used as the inspiration for a variant DC Direct figure or even a chase version of this Mystery Mini.

Batgirl, in Bombshells, was not just Batgirl. While she was in Louisiana (hey, we told you to read her review), she was turned into a vampire. The Bombshells statue line released a "Special Holiday Edition" variant that saw her in black and orange, with her flight cap off and her fangs exposed. It looked great, but statues are way more expensive than toys, so it wasn't an ideal choice for holiday decorating. Sadly, there's no Vampire Batgirl Mini to be had in this line, so you'll have to settle for her seeming human.