Myths say that this guy is enormously powerful and 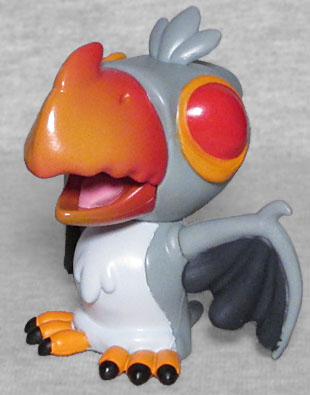 may even have supernatural powers over the weather. So, if he's ever in a bad mood, you may want to keep an umbrella handy... and track down the nearest storm shelter.

The thunderbird is a feature in the legends of many indigenous cultures in North America (though not, remember, the Apache). It's particularly prevalent in the Pacific Northwest, but can be found all throughout the Great Plains and even onto the East Coast slightly. This little guy takes influence from both birds and pterosaurs, with leathery wings, but also tufts of feathers on the chest and the top of the head. His beak is serrated and has a spike on top in front of his nostrils. The rear of the head is pointy, and he's got a long tail. The colors are great, with the gray of the body contrasting both against the black wings and the bright orange and red of the eyes and beak. It's very striking. 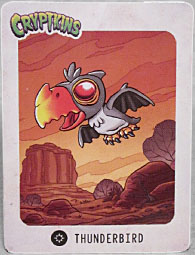 Bagged separately inside the box with each figure is a small card with art of the Cryptkin on one side and biographical facts (well, "facts") on the other: name, full-grown height/weight, descriptions, diet, and habitat and range, with a map of the world to help drive that last one home. Thundie's art shows him soaring over a crepuscular brown desert. He seems like he'd be too small to fly yet; he should still be in a nest. His range is listed as "North America," though the east cost is colored more lightly than the rest of the continent. Also, the section

about his diet reveals that thunderbirds are carnivores who sometimes eat whales? Dang!

The Thunderbird mold (sculpted by Sam Greenwell) was also used to create the 1:72 chase figure, a phoenix. The only difference was the tuft on its head being more like a flame, and the entire body being shades of orange.