There may not be a lot of things left in the mall these days, but one thing you can find is a kiosk selling cellphone accessories. And then usually near that, one full of various skin creams and various other beauty junk. ["No cream is finer than mall kiosk cream. J Lo use it!" --ed.] Sometimes they'll even be able to afford a real store space, because selling $2 worth of lotion for $50 a jar has a real nice profit margin. Looking at the west wing of the Transformers BotBots mall, the Swag Stylers have locations on the top floor and the ground floor - Chic Cheeks is upstairs.

This is, contrary to all appearances, not a microphone, 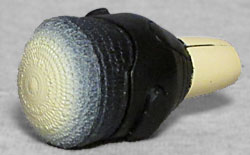 but rather a makeup brush. There's not much to say about such a useless item - and when we tell you that, remember that we once wrote 400 words on the origin of an adjective, so know that a makeup brush is truly pointless. It's a thick stick with soft bristles sticking out the top. The paint apps are pretty nice, with the white powder being more concentrated in the center and fading as it moves out toward the edges.

This is an easy BotBot to convert: split the legs, pull the arms out to the side, raise the bristles.

It's time to strut, smile, and strike a pose! Chic Cheeks is the most stylish 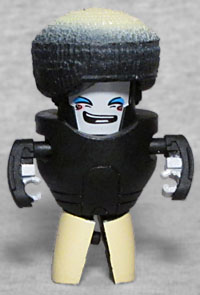 fashion designer known to bots. He loves giving makeovers and helping his friends look and feel like their best, most glamorous selves!

There may be one more step to the conversion, but it's not shown in the instructions or the art. See, the top of the head (the "hair" part of him) can twist side-to-side - but not all the way around, just about 45° to either side, far enough that you can choose if you want the bump on the lower edge to be between the eyes or off to one side of them; basically, which direction he's combing his bangs. At least that's something interesting, the white arms don't do much to break up the solid black body, and the happily smiling face gets lost under the heavy brow. 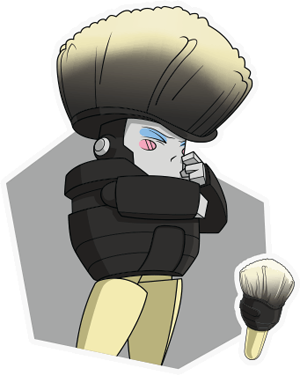 Chic Cheeks is available in two Swag Stylers 8-packs, and the mold was used again in Series 3.