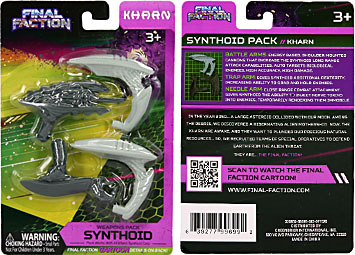 As mentioned in today's review, the Final Faction Synthoid doesn't have any accessories, but he does have a dedicated Accessory Pack. Sold for the same low $1 price as all the other toys, the accessory pack has four new pieces. And because there's literally nothing about this line that's halfassed, the back of the package explains what they're called and what they can do. 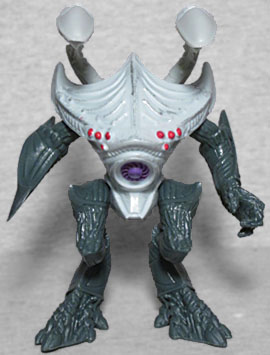 The Battle Arms are reminiscent of the weapons on War of the Worlds' tripods, stretching up over the Synthoid's shoulders... or scalp... to aim forward. They're smooth, curving to a point at both the front and back with a bulge in the center and three horizontal vents on the top. The armored bits are styled to match the texture of the torso, while the supports that hold them up are more like the muscles of the limbs - they're not painted, but you could customize them if you like. The pieces plug into large holes in the Synthoid's back. 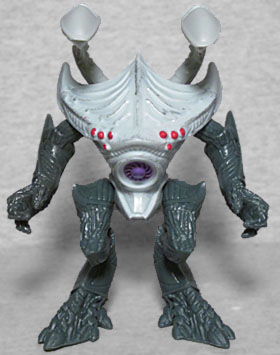 The Trap Arm is a right-handed copy of the left arm, so it's got a hand. Dextrous indeed! If you want a fully plain Synthoid, there ya go! Can they morph their arms into different weapons, or are they grown/assembled in certain configurations? It's up to you and your imagination! I don't have any of the other Kharn yet, but the hands do look like they'd be able to hold the other guns. 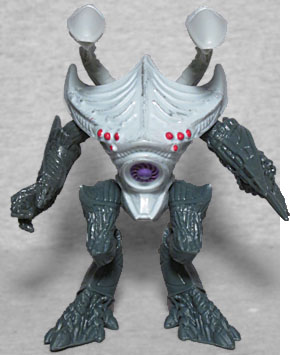 Since the replacement right arm was normal, the replacement left arm gets to be wild. The "needle" part of the Needle Arm is more like a gigantic spike, which raises the question of how it injects anything without stabbing all the way through it. There are serrated bumps along the top and bottom edges of the arm, 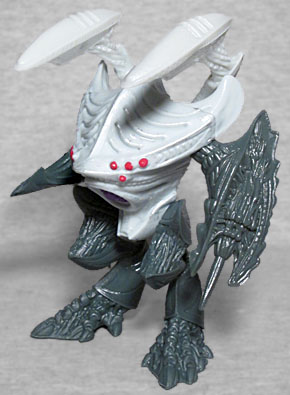 while the sculpt in the middle looks like stringy flesh that's been pulled out and shredded. It's super unpleasant, and totally awesome!

The Synthoid's arms just fit into the body with large round pegs, so they're easy to swap out. The way they're designed means left will always be left and right will always be right, but that's fine. Like we said, the accessory packs cost the same $1 as the figures, so technically a fully equipped Synthoid costs twice as much as any other Final Faction release, but that's hardly a deal-breaker; buying those two sets will give you at least eight different options for how you want to display them, if not more. Hard to beat that value.