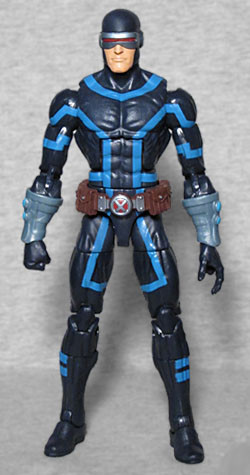 Cyclops assembles a team of mutants to destroy the Mother Mold and vanquish the Sentinel threat.

Yes he does, and spoiler, it goes pretty badly: they all die. Archangel and Husk are killed by an explosion before the mission even really starts, Mystique gets blown into the vacuum of space, Wolverine and Nightcrawler have to go outside the space station and are exposed to vastly lethal levels of solar radiation, Monet is overpowered and killed by wave after wave of human guards, and Jean Grey is set adrift in an escape pod that's caught and demolished by Sentinel mining drones. And what does Scott get? He gets to find out that his visor is not capable of withstanding close-range shotgun blasts. Whoops! [Whoopsie! --ed.]

Absolutely no surprises with this figure: as soon as Hasbro said there was going to be a Cyclops, you already knew what body he would get. It's not even like the costume design is particularly interesting, just being another dark blue bodysuit with lighter stripes scattered around it (light blue in this case, rather than yellow). 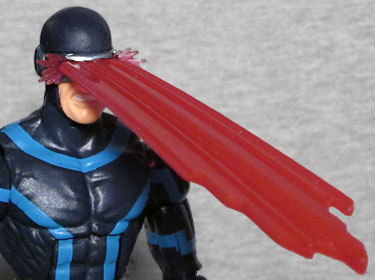 He does have the same utility belt as Magneto, but the armor on his forearms is new. So that's something, at least? The heads come from the Retro Collection X-Factor Cyclops, so this might at least be your first time getting to enjoy the "eye blast" accessory that plugs into the alternate head's visor. That really is a clever move on Hasbro's part, and one we're sad it's taken until now for anyone to come up with. The sculpted energy flares at the edges of the visor

are a nice touch as well, making him look like he's powering up even with the accessory not present.

He comes with the left arm of the Tri-Sentinel Build-A-Figure.