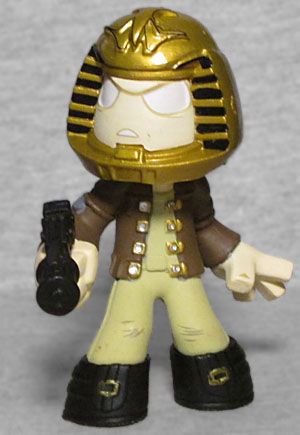 Little known trivia fact: before the show Battlestar Galactica, there was a version of it in the late '70s, designed 100% to cash in on Star Wars. (Originally, it was a sci-fi version of Mormonism, but they couldn't find funding for that.) It's most famous today for being the reason Boba Fett couldn't fire his rocket, but it has a certain retro appeal to the ultranerds, the kind of people who would be into Dune or the metric system, so it also made it into Series 2 of Funko's Science Fiction Mystery Minis.

This is Boy-Starbuck, the gender-swapped counterpart of the real version. 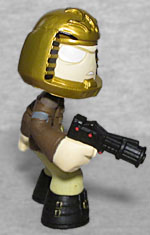 Unfortunately, Series 2 was the time when human skintone was painted way too pale, so his skin is even lighter than his khaki spacepants. On the other hand, that's how we can definitely tell this is Starbuck and not Apollo. He's wearing a Viper pilot uniform which, because this was the '70s, is a brown suede jacket with big gold buckles and a helmet that for some reason looks like an Egyptian pharaoh's headdress. He's armed with the show's laser pistol, and is posed like he's on guard or has just been surprised - it's like he's just raising the gun to fire.

Starbuck was available in a 1:24 ratio, meaning he was in every other case. But he wasn't the only BSG figure in the lineup... 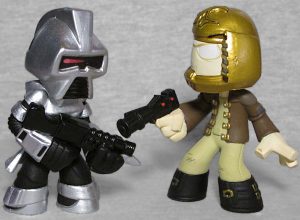