This is what happens when you order Pyramid Head from Wish.com.

Back in 2016, Funko released a series of Mystery Minis 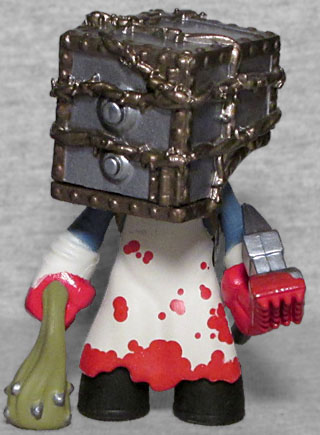 dubbed "Best of Bethesda." The game company, not the unincorporated, census-designated place in southern Montgomery County, Maryland, United States. There were 15 figures in the series (plus some store exclusives) covering some of Bethesda's major titles, like Doom, Fallout, Dishonored, or The Elder Scrolls. And a single figure from the oft-overlooked The Evil Within.

Released in 2014, The Evil Within was one of a couple wildly underrated games from that era that I loved but no one else did (cf. Murdered: Soul Suspect, and yes, there have been occasions when I've gotten them mixed up, since The Evil Within does have a goofy haunted stealth sequence not dissimilar to those in Murdered).

The Keeper is another in a long line of Pyramid Head knockoffs (looking at you, Executioner Majini), but because Shinji Mikami is a real game designer it's a great riff on that kind of a character with a neat gameplay mechanic. You encounter 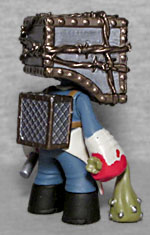 the damn thing in this awful underground maze full of safes, and when you kill him his body just "emerges" from one of the other safes littered about the area.

Like other Pyramid-alikes, Keeper dresses rather like a butcher, complete with rubber gloves and an apron. His head is a safe wrapped in barbed wire, and his backpack is a similar metal box. If you don't know what he's from, you may assume it's some sort of Fallout thing, since his clothes are the same blue as a Vault dweller's. His gloves and the lower edge of his apron are bloody, as is the big, hooked, meat tenderizer hammer he clutches in his left hand. His right hand holds a burlap sack that's weight down with something inside (he swings it at you, and it wouldn't move like that if it were empty) and has sharp metal bits sticking out.

The Keeper is available in a 1:12 ratio, meaning he's somewhere in every case.