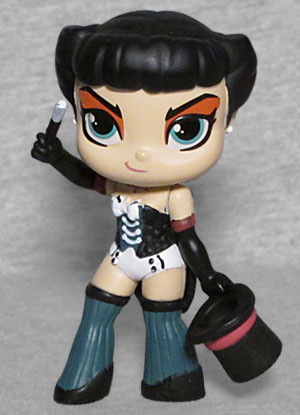 DC Direct may have dropped the ball with their Bombshells toys, but Funko is giving the designs a shot as Mystery Minis. And because the figures in the basic assortment were evenly packed, it's the first time I ever got a complete case! So drawing out a box at random, I get... *drumroll* ...Zatanna!

Zatanna actually had a fairly major role in the Bombshells comic, starting out as a prisoner of a main baddy, being used as a magical power source for many an evil scheme, but eventually breaking free and using her abilities to help the other heroes. She's of mixed Romani/Jewish descent, which would have made her super popular in 1930s Germany, but she fails to complete the trifecta by being one of the few (mostly) hetero characters in the story.

Zee has always had a fairly pin-up-ish costume, what with the fishnets

and the corset and what have you, so original artist Ant Lucia had quite the task in designing something that both looked like Zatana and looked different enough to make it clear what property she was meant to fit with. Part of the process was switching her colors: instead of a white top and black drawers, she's got white button-front shorts and a black bustier. Rather than fishnets, she's got stripey silk stockings, and pairs those with long black gloves. Her corset has built-in tails, because she doesn't wear a jacket. The Mystery Mini is posed holding her holding her wand high and her tiny top hat low, but you know what's missing? Her rabbit! Her blonde, rumpled, chainsmoking rabbit. Named John. they could have sculpted him poking out of the hat. She does have thin lines of paint representing her "Ssertssim fo Cigam" collarbone tattoo, but she's missing her eyebrow piercing (the idea being that these women were ahead of their time, and influenced modern fashion trends). Her left leg is turned weirdly to the inside, as you can tell by the sculpt of her shoes.

There was supposed to be a Zatanna in the DCD line, but she was cancelled along with all the rest. So your choices are Funko or nothing, which I believe is also Funko's corporate slogan.