Hey folks, has anyone heard of these "werewolf" things before? Are they new? 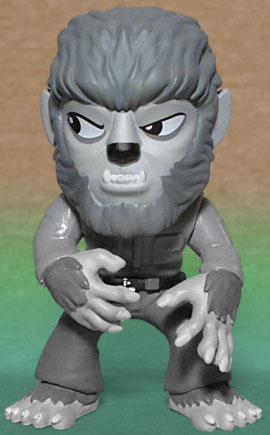 Mystery Minis, Funko has this year decided to do an entire series based solely on the Universal Monsters - Frankenstein and the Bride thereof, Dracula, the Mummy, the Gill-man, the Invisible Man, the Phantom of the Opera, a Mole Man, and, of course, the Wolf Man. The normal figures are available lots of places, but Walgreens has an exclusive set that's a bit truer to the characters' origins, by virtue of being done in black and white.

The first box I grabbed had Lon Chaney's Wolf Man - there are four minis in this series that are packed in a 1:6 ratio, including Wolfie. Yes, that means ⅔ of every case are being hogged by those four characters. Add in the two 1:12 figures and that brings the count of predictable items in every case up to 10, meaning there are only two spots on every box for the three remaining characters and the three variants to fight over - even if you bought a full case right off the shelf, there's no way you would get a complete set of all nine characters.

The Universal Monsters Mystery Minis use a different style than the Horror Classics, one closer to the Mad Max line, with painted eyes and a higher level of detail overall. The Wolf Man has a nicely feral pose, all hunched over and untrusting: his legs are wide, like he's getting ready to jump any direction, and his arms are in front of him, but held slightly away, showing that he's protecting himself but is also ready to strike. Basically, he looks like he's encountered the villagers that are hunting him, and is deciding between fight and flight.