Claude Rains starring as a Universal Monster? I just can't see it. 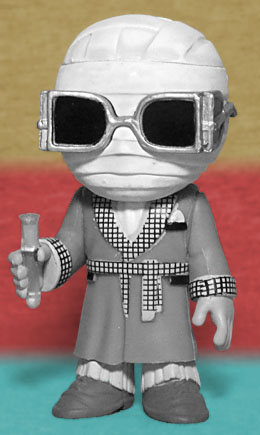 In HG Wells' original 1897 story, the titular Invisible Man was simply called "Griffin," and his path to translucency involved taking some unidentified drug and sitting in the middle of a machine that released radiation and vibration. He was an albino to begin with, which made the process simpler, and was a sociopath long before ever turning invisible: he reveals in an offhanded comment that, in need of money, he stole it from his father; but the money didn't belong to Griffin Sr., who killed himself out of shame, and Junior could barely be bothered to attend the funeral.

Universal's 1933 movie gives him the first name Jack, and made him lab assistant to a doctor who was experimenting with food preservation. The invisibility process involved a drug called "monocane," which (unknown to Griffin) had dangerous psychological side effects, thereby absolving the character of any real fault for the things he does.

The Invisible Man gets more variations than anyone else in this line: there's the normal, colorful release of course, and this Walgreens-exclusive 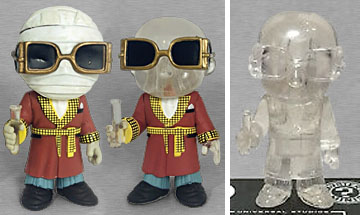 1:24 black and white version. Those both share the same molds, with Griffin just standing straight up, wearing his robe, holding a clear test tube in his gloved hand, and his head fully concealed by bandages and dark glasses. There's also the logical "clear" variant, which takes two forms: the mass version retains the colorful robe, but has clear hands and a new head with no sculpted bandages; Walgreens' version keeps the blank head but is fully clear, without a drop of paint to be found anywhere. It's also 1:72, so good luck finding it.