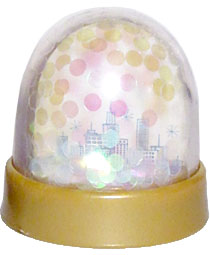 Big surprise on Day 24 of the Elf Advent Calendar! After getting WandaSanta yesterday, I thought today would be the real one, Ed Asner. Instead, we get a snowglobe. Vaguely representing the one Papa Elf gave Buddy so he could find his way to NYC, this is an interesting piece: real snowglobes are filled with a mixture of water, antifreeze, and glycerol (to make the "snow" fall slower), which wouldn't work in this case; instead, we get a flat slab of plastic with the same image of New York's skyline on both sides; this slab is shaped to fully fill the the dome, separating the interior into two pieces; then, both halves are filled with colorful chips of plastic that can shake around freely within. Static electricity will even make some of them stick to the dome, creating a look of perpetually falling snow! It's clever work, if nothing else. Maybe not the strongest way to end the month, but a sensible inclusion.