Today we have a review of NECA's American Werewolf in London Ultimate Nightmare Demons, and yo did not seem too keen on the movie. Because he lacks taste. 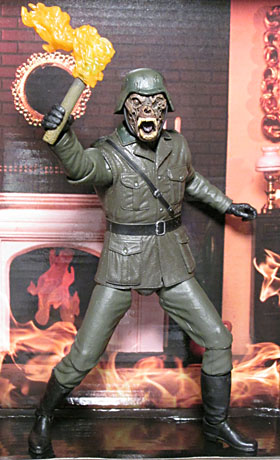 If you're a fan of the film, it may interest you to know that in 1997, BBC Radio 1 broadcast an audio drama adaptation of the movie. It was produced by audiobook superstar Dirk Maggs (who's done a bunch of awesome stuff, so much so that if you recognize the name of a single person who produces audiobooks, it's Dirk Maggs; Aliens, Judge Dredd, Superman, Batman, Hitchhiker's Guide, Agatha Christie, Neil Gaiman's Sandman... he's got a hell of a resume), and it featured some of the original cast reprising their roles.

It's not a direct copy of the movie script, it's an adaptation: references have been updated and there's more comedy to be found, plus entirely new scenes to flesh out the world. Ever wonder where the wolf came from in the first place? This will tell you! The adaptation was broadcast in three-minute snippets all throughout the day on Halloween, which had to have been annoying. Fortunately, we live in the future, where you can listen to the entire thing at once:

It's impressive that such a visual film was able to be adapted into an audio-only form at all, but to do it so well is outstanding!

This entry was posted in addendums, videos and tagged Power Rangers, Street Sharks. Bookmark the permalink.