BBTS and Fresh Monkey Fiction have teamed up to create a new 1:12 scale toyline: 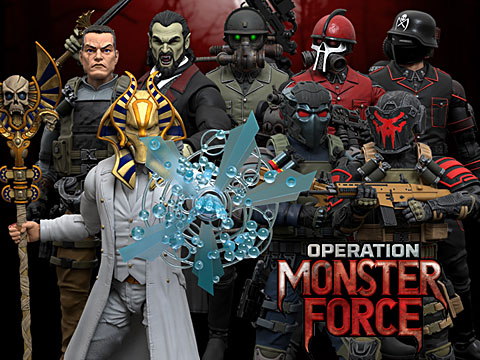 Once a sorcerer pharaoh whose reign was so vile his name was erased from Egyptian history, the Forgotten King pursues a sinister agenda, gathering mystical artifacts from around the world for some unknown purpose. Every soldier sent to stop him is killed and re-animated into an undead zombie that is under the Forgotten King's command.

Worried the Forgotten King's rein of terror will not be able to be stopped the military enlists the help of monster hunter Declan Van Helsing. Seeing no other option, Declan goes against the Van Helsing family's wishes and opens Tomb 13, freeing the world's most powerful vampire... Count Dracula. His rationale - it may take a monster to bring down a monster.

And so, Operation: Monster Force is formed! Under Dracula's direction, a unique vampire strike unit is created called "Delta Red," whose undead condition makes them immune to the Forgotten King's powers.

It's a race against time for Dracula and Van Helsing to discover the Forgotten King's hidden lair and destroy him before his mysterious plan reaches completion.

They're looking quite nice!

This entry was posted in news and tagged vampires. Bookmark the permalink.