Since we're dubbing February "Old Toys Month" at OAFE, we've decided to take a look at the past of our hobby - specifically, the part of the past that doesn't exist. This is the first in a series (of indefinite length and regularity) of blog posts memorializing cancelled toys.

This figure was first shown in ToyFare #10, where it was identified as "Stargods Ra," with no further information. 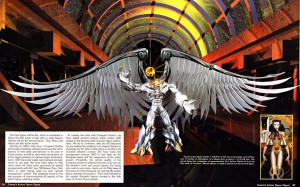 The figure was going to be produced by Antarctic Press, the same people who eventually did the Flaming Carrot action figure. [Correction: they worked on the Flaming Carrot, but it was eventually released by Dark Horse Toys --ed.] Stargods was a comic that only ever managed to get two issues out before the creators lost interest. It had some minorly interesting designs, but the plot sounded like a Stargate knockoff - gods are secretly aliens, some want to conquer the galaxy, others are good guys, the whole deal. That may be why, years later, when someone wrote to ToyFare to ask what had ever become of this figure, whoever was answering letters that month confused the two, saying that Ra was just a Stargate figure that had been cancelled.

A March of '99 article on Raving Toy Maniac revealed that the tooling cost of the figure proved to be too great, and the comic wasn't shipping on time, so the support was withdrawn. And honestly, it's a shame. Looking at the figure now, he may not seem special - McFarlane Toys has released things that look similar, and the articulation is similar to Marvel Legends, but you have to remember that this was designed five years ago, before any of those things were true. Of course, it probably would have cost $20 back then, and no one would ever have paid that. We're sorry to have missed you, Ra.

This entry was posted in cancelled toys and tagged Stargate, ToyFare. Bookmark the permalink.