When Captain Marvel debuted, he was a pretty standard hero: secret identity, supervillains, all that. He had a mildly interesting character arc, in that he came to Earth as a conqueror but was won over by humanity (like Silver Surfer); he was initially Earth's protector, but the role was eventually expanded to include the entire galaxy (like Green Lantern).

Eventually, writer Roy Thomas and artist Gil Kane gave Marv a quick revamp, switching him from a melange of superhero origins to a pastiche of the other Captain Marvel - the SHAZAM! one. Check out the parallels:

A young boy (Rick Jones, Billy Batson) is lured by a vision (the Kree Supreme Intelligence, the wizard Shazam) to a secret underground location (an abandonned Kree base, the Rock of Eternity) where he gains the ability to change, in a flash of light (clanging the nega bands together, calling forth the lightning), into a red-suited superhero (Captain Marvel, Captain Marvel) with a golden symbol on his chest (a star, a lightning bolt). Eventually, the hero joins the greatest superteam around (the Avengers, the Justice League). 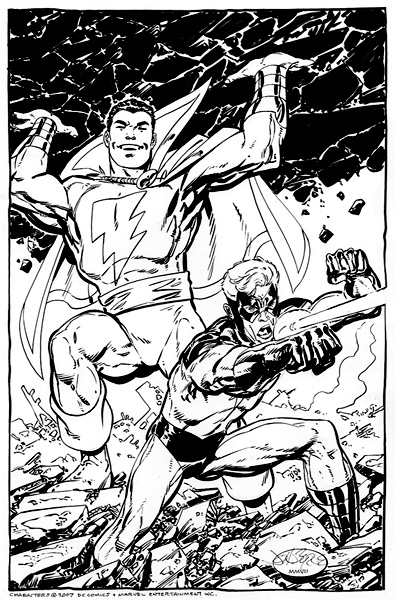 As a further in-joke, Marv also met Professor Savannah, a nod to Cap's Doctor Sivana. Though Savannah was an ally, not a villain. Also, neither DC nor Marvel have had any luck turning their respective Captains Marvel into commercial successes in the past few decades. Though that one's probably not intentional.

This entry was posted in addendums, comics, DC, lists, Marvel and tagged Shazam. Bookmark the permalink.