I was really surprised when I read what Shocka posted yesterday about Mattel cancelling the Dark Knight Joker figure. It was unexpected, sure, but was also a bit confusing, so I dug into it a bit more.

Here's the original story, which (almost) makes things a bit clearer. Reading between the lines, I think this is what they're trying to say:

Mattel released both 5" and 6" versions of the Joker: the regular movie line and the collectors' edition Movie Masters. Having decided the Movie Masters version, as it stands, is too gruesome for toy aisles, they won't be making any more - a decision which will leave only the toned-down 5"er on shelves in the future.

The problem is the writer seems confused about which figures are which: the one shown on the page there is the 6" Movie Masters figure, but everything he says - "roughly an inch smaller," "in standard blister-style packaging" - sounds like a description of the 5" movie line. 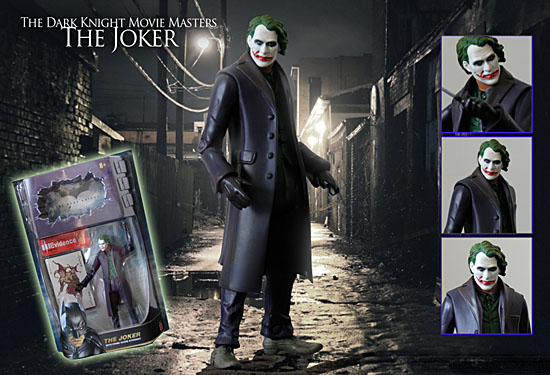 Yes, the 5" Joker is simplified and sanitized, but that's what you get in a kid-aimed line. The product reaching stores is exactly the same as the prototypes shown in ToyFare (well, the coat is painted a different color), and therefore also not the animated style. The sculpt of the 6" Joker has the Heath Ledger likeness, but it wasn't intended to be shared with the smaller figures, any more than the 6" Batman's sculpt was. You can compare the two Jokers here.

It's important to remember that there's no official word that the 6" figure isn't going to continue being released: just this rumor. All the rest is just people over-reacting and confusing the issue. There's no "hastily thrown together" or "animated" version, just the two we've already seen, the same two that were in the works for months.

This entry was posted in commentary, DC, Mattel and tagged Batman. Bookmark the permalink.