This is the latest in a series (of indefinite length and regularity) of blog posts memorializing cancelled toys. Our figure today is ToyBiz's Blade.

Recently, apparel and designer toys brand Cookies -N- Cream ran an interview with one of our favorite sculptors, Dave Cortes. There were lots of shots of the prototypes he has on display in his studio, including this beaut: 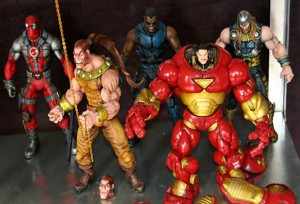 Among the partially disassembled Hulkbuster, the two-up showing Eddie Wires' original paint design for Thor, and the revelation that "Age of Apocalypse" Sabretooth was originally going to have an alternate calm head (sadly, the photo crops out a potential image of the Wild Child that was also cut from the final release), we can see a new Deadpool and a Blade the Vampire Hunter that's never been seen anywhere. That chest looks like it might have been used for one of those weird X-Men Classics Wolverines, but it's definitely not something that ever made it into the line, or was even shown to the public before.

Update: we found a larger picture of the Deadpool, and it's much better than what we eventually got from Hasbro: 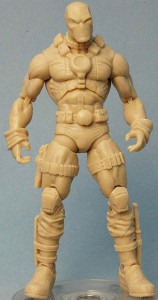