Howdy howdy, blockheads! As you're surely aware, Lego has gotten in on the collectible figure game, releasing the first series of individually packaged Minifigures. They've been available in Europe for a while now, but they're finally starting to show up in the US. There are 16 different figures, and they're all very cool. The only downside? They're blind-packed: you don't know what you're getting until you buy them.

Luckily, like the Figure Factory toys, there's a way to tell what's what (if you're a giant nerd). Each package has the same UPC and Item #, but there's also a second barcode in the upper right hand corner on the back of the bag, and that will tell you what's inside.

The barcodes for the mainland European releases were cracked a while ago, but they're not the same on our releases. Jerks. Anyway, we want to help, so we're going to provide a handy, printable chart of which UPC equals which minifig: 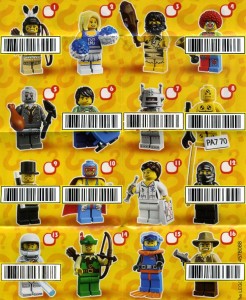 We'll add the others once we have them. If you have any of the missing codes, let us know.

This entry was posted in codes, Lego. Bookmark the permalink.