Last week I said that I had way too many Minimates awaiting reviews. In case you thought I was just blowing smoke, here's a picture of one filing cabinet drawer: 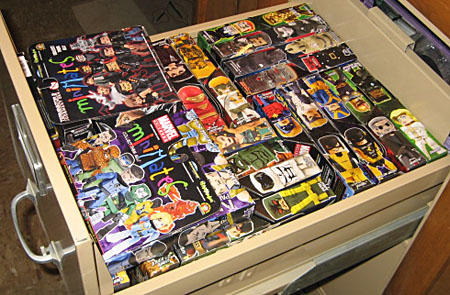 As you can tell, this feature is going to last a while. On with the show! 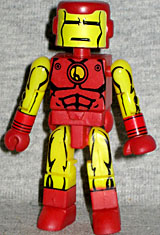 As of this writing, there are 30 Iron Man Minimates - that's nearly as many as Wolverine. This, however, was the first. This is the Classic Armor, the suit he wore for 20 full years (in real-world time, not comicbook time; that would be like, what, seven years in-universe?). This is the one he wore post-"First Appearance" armor, all the way until the Silver Centurion armor came along. For a lot of people, this is "the" Iron Man, so it makes a ton of sense that Art Asylum would make him first. The body is red and the limbs are yellow, as you'd expect; painted details on the arms and legs really sell the anatomical look, but it's too bad it's only on the fronts and not the backs. The torso is fully detailed on both sides, however, and there are thin bands used to create the details of his gloves.

There's something special about this Minimate: he's not the first to have a removable

mask or helmet dealie, but he is the first to come with a secondary piece to wear when the helmet is off: he gets a black hair piece that slips onto his head so he doesn't have to be bald. Nice! He has a grey goatee, rather than the traditional Tony Stark mustache. I don't remember where, but I once read that this was done to honor AA's Senior Creative Director Nelson Asencio, the guy who designed the Minimate body in the first place. We can think of worse reasons.

Iron Man was the designated variant-haver for Series 6, and his alternate costume was his Stealth armor. It's basically the same figure, painted blue. 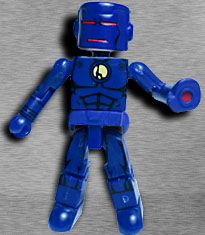 It's lacking the lines on the arms, but everything else is the same. Both Iron Men come with the same new pieces: a belt piece with pods over the hips, and a hand with the palm exposed and a repulsor port sculpted thereupon. (Confidentially, I gave IM's normal hand to Captain America so he could hold his shield properly.) Both normal and variant figures have the same frustrating flaw, however: the helmet is too damn tight on the head. If you push it all the way on, you may never get it off again. The first time I did, I had to put him in the freezer to shrink the head, then dig around in there to finally pry the damn thing off. So I never have to go through that again, I put the helmet on a spare Spider-Man head because it's easier to swap heads than to remove the removable helmet.

For no fathomable reason, Iron Man was paired 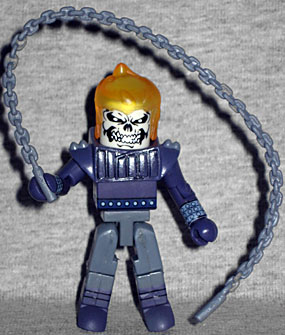 with Ghost Rider in this set. Since he's wearing biker leathers and not a bright blue jumpsuit, we can determine that this is the superior Danny Ketch version of GR, not Johnny Blaze (though Johnny would get a Minimate five years later). He gets a unique piece covering his shoulders to suggest a large bulky jacket, complete with spikes on the shoulders. There's a belt painted at the waist, and spiked wristbands painted on the forearms. He has a translucent yellow flame piece that fits over his head, and it's an original mold - most figures come with the same flame that Human Torch introduced, but this piece has only been used here, and on a re-release of this figure in a Toys "Я" Us 10-pack. That's it. GR has one of the best Minimate faces ever, and comes with a 6" long plastic chain.

The coupling of Iron Man and Ghost Rider makes no sense, but this is still an awesome set. GR is a terrific Minimate, period, and even all these years later, this is still my favorite IM Minimate. The helmet thing is annoying, but overall this is one to get.