The first official DC Minimate (ie, "not part of a C3 set") was John Stewart. Half a year later, when the first series of DC Minimates finally reached stores, 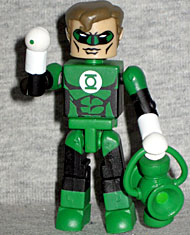 Hal Jordan was among its ranks. Although they're both Green Lanterns, they don't have any paint masks in common - John was wearing his cartoon costume, while Hal is in his classic Bronze Age togs. He uses the same new hair as Superman (not Punisher's, as I initially thought), but sadly, his temples aren't gray. He comes with a lantern as an accessory, and his hand is painted with a green dot representing his ring. The dot's off-center, though - it should be in the middle of the hand, not off to one side: as it is, it looks like he's wearing it on his index finger; if the ring was on his left hand, it might look like it was on his ring finger, but Hal's a righty. While his torso is very detailed, with muscles on both the front and back, there are no details on his limbs, so they look like they don't belong on this body. 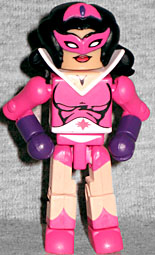 Hal's foe in this set is also his girlfriend. Yes, it's Carol Ferris, aka Star Sapphire. The second Star Sapphire - nobody remembers, but the Golden Age Flash also fought a villainess named Star Sapphire, a queen from the 7th Dimension who wanted to conquer Earth. This is the classic "swimsuit" costume, not the stripperific "Pink Lantern" version that's around currently. She has a few costume elements that don't lend themselves easily to the Minimate style, but AA did a pretty good job. Her mask, for instance, extends well beyond the sides of her face, so here it's a part of her hair piece - brilliant! Her tall collar is a separate piece worn around the neck, and the hair is shaped to fit around it. The face and the decolletage both seem to be painted slightly too high - neither lines up quite the way it should.

This set has some problems in the paint, but GL and Star Sapphire are both perfectly acceptable Minimates. Besides, it's nice to see Hal paired up with someone old enough to have hair downstairs for a change.