Today I reviewed the variant Modern Starman from DC Universe Classics Series 15, because he's the more interesting version. The standard release doesn't deserve a full review, just this quick one.

Ted Knight invented the Cosmic Rod which collects stellar energy and allows the bearer to fly and manipulate gravity. Taking the name Starman, he became a member of the Justice Society of America. Though The Mist was his greatest foe, Ted suffered most from his own guilt over helping to create the atomic bomb, leading to his ultimate retirement. Ted's son Jack reluctantly took up the mantle and the Mist's daughter, going by the same name, became Jack's archenemy.

Like many early superheroes, Ted Knight was a wealthy industrialist - well, more "wealthy," and less "industrialist." He seems to have been one of the idle rich, and he passed his time as an amatuer astronomer until he invented the "Gravity Rod," which, judging by the way the old comics described it, apparently functioned by manipulating string theory. He was a crazy rich guy who spent his money and his free time doing crazy things with space - so he was basically Richard Branson in tights.

Starman uses a standard DCUC body, one of the slender ones. The tops of his boots are sculpted, and his belt/holster combo is a new piece. He has the same bare hands as Jack, and the ridiculous fin on his head. Ted never wore a mask - apparently thinking no one would equate the adventuring Starman with the layabout Ted Knight - and his face is very nicely sculpted. Very good detail work there.

Starman looks like a Christmas elf: he's red and green, 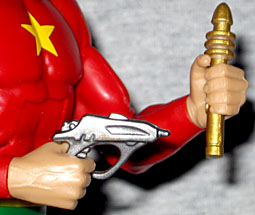 with just a little bit of yellow. The star on his chest and the one on his cape are tampographed on cleanly. In addition to the collector's button and the BAF piece, he has two accessories: the original (ie, "short") Cosmic Rod and a pistol that fits in his holster; the gun is some kind of weird sci-fi laser blaster, rather than the real-world gun a Golden Age hero would have likely carried. And the thing is, while Starman did often have a holster on his belt, it was for carrying the Cosmic Rod, not a gun. This seems to have been taken from the cover of Starman #42, but it still doesn't add very much to the figure.

Golden Age Starman is a fine, plain figure: he's got a very nice facial sculpt, but the rest of him is just nothing special. If I hadn't gotten him in my case, I wouldn't have bothered hunting him down.