Rustin's Spoils of the Week #22

Traveling for work deposited me in the fine state of Florida not too long ago leaving me only a few short hours from Orlando. This of course meant one thing... Destination: Wizarding World of Harry Potter! With my one day off I got up to Universal's Islands of Adventure theme park to experience WWoHP, revisit some old friends like The Incredible Hulk roller coaster (my favorite coaster), and give IoA a general second-chance after a pretty lackluster first visit almost a decade ago. Sadly merchandise was slight, but memories were aplenty. However, this is not a blog about things I recall so we will instead focus on the things that I bought. 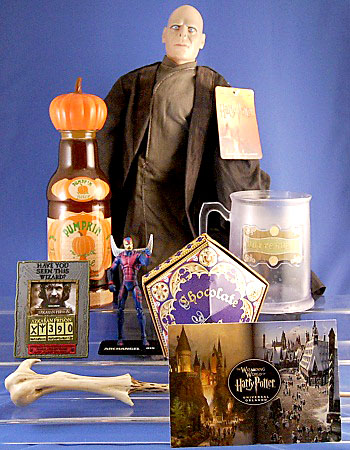 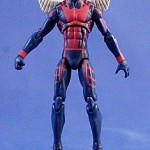 Man oh man - the secret to finding impossible-to-find Marvel figures? Shop at theme parks or related stores! A few weeks back I finally found an Archangel at The Disney Store and now I've found the variant at Universal Islands of Adventure. Marvel is kind of a weird, tricky license in that they sold the theme park rights to Universal about two decades ago and indeed Universal built a fully themed land around them at IoA, fast forward to 2010 and the Disney Company bought Marvel outright. The only long term contract that's left to stand (excluding the rights held by Fox for as long as they keep the film franchises alive [X-Men, Spider-Man and Fantastic Four]) is the theme park deal with Universal, because that represents a huge amount of invested capitol and indeed Spider-man and the adjoining ride are still central to the IoA marketing campaign. Of course, that means that Universal is very unlikely to make any new attractions. But that's all irrelevant to my having this figure, which was purchased at the store across the street from the Fantastic Four Cafe and Villain's Arcade. This figure is identical to the standard Archangel figure save but for the new head with golden Death mask and different, simpler, smaller wings. I am rightly pleased to have this figure but if I were to pick one this certainly doesn't compare to the stellar standard version. 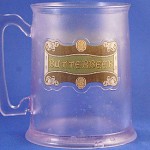 The number one, two, three, four, and five reasons I wanted to visit the Wizarding World of Harry Potter extension at IoA was to try Butterbeer. I don't drink alcohol but my concept of beer plus my love of butter has also made this drink seem like the greatest culinary concept and the fact that the drink was getting rave reviews made me tremble with anticipation. Universal sells two kinds of Butterbeer - Regular and Frozen - at three locations: two Butterbeer carts in the Hogsmeade thoroughfare and at the Three Broomsticks restaurant. I had Regular Butterbeer first and it was... odd. Essentially it's like a cream soda in this case heavily carbonated with about a quarter inch of butter cream added to the top (giving the illusion of beer froth). The idea is that you take a big gulp and the cream soda plus the butter cream give you that butter beer flavor. It was just... not great, and I think it's really the carbonation that funks it up and left me with an icky feeling. The Frozen Butterbeer, on the other hand, is a non carbonated slushy mix with the cream flavoring which is once again topped off with a layer of Butter Cream. This version is much smoother and tastier, with a more present flavor of butterscotch. If you try only one kind, try the Frozen. The drink costs about $4 for either Regular or Frozen and you can pay an addition $7 for a plastic Butterbeer mug, that offers no discount to the cost of the beverage. 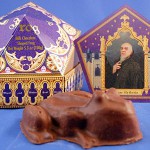 In the books and movies they're small tree-frog sized chocolates that are enchanted to hop about like real frogs (which is kind of creepy). But beyond the frog, the big thing the kids are after are the collectible cards of each Hogwarts Headmaster. The package does a good job of duplicating the look from the film though the top is a single layer of cardboard that feel worrisomely flimsy, though this did survive the flights home okay. There indeed is a card, lenticular here (to give the feel of the "living photos"), but for these there are only four possible characters - the four House Founders of Hogwarts. They don't look familiar to me so I'm not sure if the "actors" appear in the films, but they are definitely on the cards and appear as Talking Portraits in the queue for the Harry Potter & the Forbidden Journey ride. I scored Salazar Slitherin, which is probably the one I wanted the most, so... sweet! And speaking of "sweet" (oh yes, that just happened) the Frog is huge! Well, not "huge" but easily three times the size I expected - it essentially fills the whole footprint of the 3½" box! And he's solid chocolate, too. The sculpt is more bullfrogish in look to me, with a mix of soft and detailed sculpting, though I must say I have no idea how much of that comes from the mold and how much is the result of the exceptional Floridian heat. But you know what, to my tongue this is Milk Chocolate of a surprisingly high grade! These things cost $10 apiece, which is easily a third more or twice what I expected, but between the card and the huge hunk of chocolate, that actually seems a reasonable price. 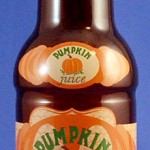 Much like Butterbeer, it's a much-discussed beverage of the Potter-verse and thus a must-have for all fans. It essentially plays out just as I would expect, though it does rely more on an apple flavor than I expected. Essentially this tastes like a 50/50 split of apple cider and pumpkin pie filling. A little heavy on the cinnamon too, this is pretty much exactly what everyone would want at Thanksgiving dinner. What's particularly cool is the "collectible" bottle. The bulk of the look is just a shrink wrapped plastic cover over the bottle, but there is a pretty cool plastic pumpkin that snaps over the proper bottle lid. Be to shake before consumption though as there is a lot of sediment (flavor?) that settles to the bottom. It should also be stated that both this and especially Butterbeer are incredibly sweet. I'm a guy that was drinking around a gallon of soda a day not too long ago and even I couldn't finish my third Butterbeer. Indeed, everything else I drank for the next 18 hours tasted very sweet. Pretty intense stuff, but thus is the cost of magic, I imagine. 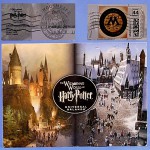 The so-called Wizarding World of Harry Potter is little more than a theme extension built on the Jurassic Park end of the Lost Continent "island." As such, it's the smallest of all the themed areas but also the best and most popular... so that's fun. The whole area is themed to look like the village of Hogsmeade and the effect is stellar (more when looking towards the Hogwarts Castle than away from it) and to play into the themeing Universal teamed with the United States Post Office to actually make Hogsmeade its own postal zone. Thus you can buy postcards and stamps at the Owlery and sent a note to whomever you'd care that it will carry an official and legal "sent from Hogsmeade" stamp. Not too shabby. The only downside is that the postcard offering are very scant and only feature concept paintings from the park - lame, Universal. Very lame. On the up side, the postage stamps have multiple themes, and I chose the ones with Ministry of Magic logo. I do recommend getting your postcard stamped by the Mailbox Attendant before you write out your notes, that will allow the stamp some good real estate to be fully visible as opposed to going over legal text such as with mine. 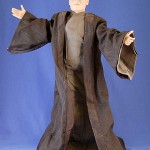 Okay, so... W.T.F. This is the only figural collectible for Harry Potter in the entire park (save for some crappy miniature dragons) - and it's a doll of He-Who-Shall-Not-Be-Named!?!? I'm a big Voldemort fan but still, what the hell is this all about? A doll of the Dark Lord? And nothing else? Well... it is the company that turned down Guillermo Del Toro's At the Mountains of Madness starring Tom Cruise, so it's not like they're known for good ideas. At any rate this is plastic hands, feet and head on a plush body with a bendy wire skeleton for posing. On top of that is a softgoods robe and cloak. For what it is, its pretty awesome. But... what it is is just confusing... unless Harry finally defeats Voldemort by turning him into a doll... (I haven't read the 7th book, I watch the movies first, because... you know... I want to like them, rather then see only what they did wrong).

[SO NO SPOILERS, POSTERS! I know you people sometimes have a hard time understanding that. I don't know what happens, and I don't want to know.] 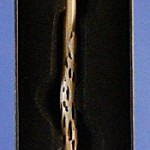 Hoo boy have I been wanting this for a long time. A full scale replica of the Dark Lord's wand! The Noble Collection has been making these replicas for several years and have covered everyone from Harry Potter to Death Eater #3. Now that's a complete collection worth having! Though the box for this makes no mention of The Noble Collection, I'm pretty darn certain this wand, and the many others on sale, are made by them. The wand is cast in resin, probably the bone-white color of the actual piece with a solid black wash to fill in a lot of the details. One of the things I love about these wand replicas is that you can find a lot of details and features that obviously aren't seen onscreen, but sometimes aren't recognizable until it's in your hand. Of course the coolest, and most unique, feature of Voldemort's wand is its thorn-looking hook at the base, which allows you to comfortably hold and wave the wand while open-handed, just like the Dark Lord himself. But the cool thing I didn't notice until after several Avadacadavras and Cruciatus curses is the thumb press on the top of the hilt. The handle swoops up right where your thumb rests, allowing you to really put some force in spells. Between the hook and the thumb press this wand anchors in your hand like no other! It comes in a decent enough box with Voldemort's name printed on a small card at one end and flocked plastic tray that hold the wand snugly in place. At about $32 apiece, it's pretty steep to collect the whole lot, but if you have a favorite character then the replica wand is well worth it, and certainly none are more fun than His-Who-Shall-Not-Be-Named!

This entry was posted in Hasbro, Marvel, Rustin's Spoils of the Week and tagged Harry Potter, Marvel Universe. Bookmark the permalink.

7 Responses to Rustin's Spoils of the Week #22