NECA is doing a superb job of turning the Predators seen at the end of Predator 2 into toys. As pointed out in today's review of Snake Predator, it's not just their armor, but also the accessories they come with that are taken straight from the film. Here's a handy chart to prove it: 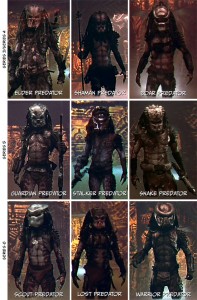 As you can see, if a figure comes with a disc or a spear or anything else, it's because he had the same thing on-screen. Clearly, there's a lot of attention paid to every detail - which is all the more impressive when you find out that Fox didn't have any reference material on the costumes to give NECA, which means they're doing it all the hard way.

It's also worth noting that for the most part, the names NECA has given the figures are not the same names they've always been known by. None of the Preds are ever called anything at all, but since fans needed to discuss them, they all got various nicknames:

So out of all of them, Boar and Snake are the only ones whose names remained the same (and even then, some people called Snake "Snake Hunter"). It's also interesting that the guy NECA calls "Lost" is different from the one the fans called the same thing.

And while we're at it, nobody seems to know where the "Lost Predators" name for the group came from. Though we'd definitely be interested to hear.

This entry was posted in addendums, Geek Speak, lists, NECA and tagged Predator. Bookmark the permalink.

4 Responses to The Lost Predators