Today we reviewed the Four Horsemen's new Masters of the Universe character, Draego-Man. Since he was invented for the MotU Classics line, he doesn't have a vintage equivalent to compare him to. But if you're wondering what he may have looked like if he'd been around in the 1980s? Take a look: 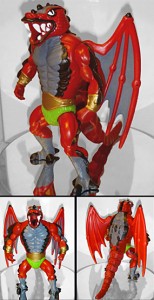 Now, clearly that's not a real toy. That's a custom character called "Drakul," made by TombstonePiledrive using Whiplash's body and parts from a Fisher-Price dragon. But you must admit, it certainly looks similar to Draego-Man and gives you an idea of what he might have looked like if he'd actually been released in the '80s. You can just imagine him running around on the cartoon, being stupid and getting called names!

This entry was posted in addendums, customs, Mattel and tagged dragons, MotU. Bookmark the permalink.