Mattel screws customer out of Voltron

An article posted today on Consumerist once again highlights the idiocy of Mattel and its subscriptions. 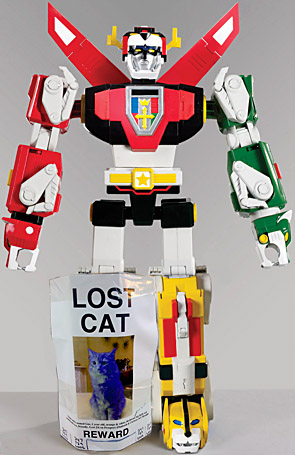 A fan signed up for "Club Lion Force," aka the Voltron sub. He was living in New York at the time, but recently got accepted to an MBA program in the UK and had to update his address. If you know anyone who's had to change their address with Matty, you can probably guess what happened: that's right, when the next lion shipped, it went to the wrong place.

I call Mattel Customer Service and they say well when the Lion is returned (as my old apartment building will no longer accept shipments for me) that they'll refund me my money and not to worry. I asked if I'll get that Blue Lion they said no. I asked if they could ship me another Blue Lion to the new address (more money for them!) and just refund me the money in a month or so when the Blue Lion from the old address comes back to them, they said no. They kept trying to assure me that I'd get my money back and I asked them if they even knew what the product was. That without all 5 Lions I won't be able to form Voltron (oh god this seems like an old episode of the cartoon itself).

I said fine, who is it being shipped by, they said USPS. I call USPS and get a change of address put in and provide my order number so they can track the package. They said that's not a USPS order number. So I call Mattel back and they said a USPS tracking number has not been generated yet because they haven't picked up yet. I asked Mattel to then change the address if USPS hasn't picked it up yet and Mattel said they couldn't do that.

So basically, they shipped to the wrong address. They think my money at this point is more valuable than the actual product that makes the other 4 work. They won't reroute my package. They also won't give me a tracking number so I can reroute it myself.

Now, we all know that whoever he's talking to on the phone is nowhere near the warehouse where the toys are, so it's not like they can just go downstairs, pull his lion out of the pile, and put the new address on there. But surely there's some system in place that allows them to find specific packages. If his credit card had been maxed out, it's not like the computer would have let the package go out the door, right? So the Digital River employee should be able to flag his account, and when the processors get to his package, they'd see something was wrong and pause to find out what. 30 seconds' worth of work on everybody's part, and this problem could have been fixed. Instead, Mattel (and its contractors) continue to halfass their way through things, and collectors are the ones who get burnt.

This entry was posted in commentary, Mattel and tagged Voltron. Bookmark the permalink.

8 Responses to Mattel screws customer out of Voltron