In conjunction with today's Red Lion review, here's the official profile of its pilot, Keith: 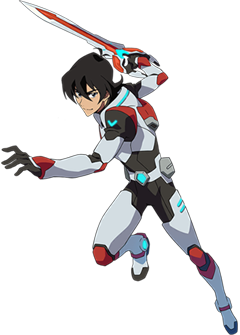 Orphaned at a young age before enlisting in the Galaxy Garrison, Keith is somewhat of a lone wolf. Considered to be the most talented pilot of his generation, he refuses to live by other people’s rules, instead choosing to carve out his own path.

The '80s Keith was the team leader, but didn't really have any personality beyond that; his Japanese counterpart, Kogane Akira, was much the same, being calm and commanding, but hating having his orders questioned.