Today we reviewed the Marvel Legends Uncanny X-Force set, so consider this mini-review an addendum.

While we're waiting for Marvel Legends 3 to come out, I broke down and picked up X-Force Deadpool from my local comicshop - nobody knows the case ratios yet, and I didn't want to miss out on him. 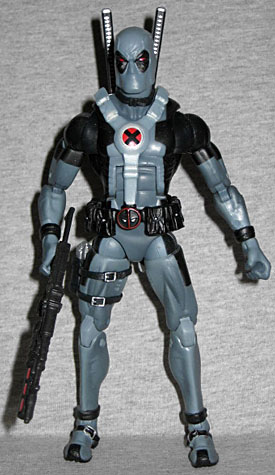 No job is too dirty, no payday too big for the Merc with a Mouth - Deadpool!

Hasbro is going variant-happy on ML3 - there are six figures in the series, and four of them have some kind of variant. The X-Force uniform is Deadpool's standard release (at least, judging by the Clayton Crain artwork on the back of the card), and his variant is in the traditional red and black. Now, we don't really mind that: there have been two red and black Deadpools before, but neither of them have ever been easy to get; I may have both of them, but I certainly don't begrudge Hasbro giving more fans another chance to get one, too. That still doesn't mean that I wanted to roll the dice on only being able to find the red version, so like a sucker I overpaid (with the only consolation being that at least the money was supporting my lcs).

This figure is the same mold as Hasbro's previous Deadpool, so that means a really good head, a reused body, and a crotch that's sized for a 7" figure instead of a 6" one (or 6⅛", in this case). It's been how many years now, and Hasbro still hasn't fixed that? Dorks. The paint apps are the same as that figure, too, just done in grey instead of red. 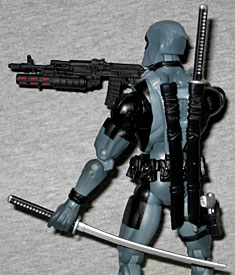 His belts, holster and scabbards are black instead of brown, now, but he still comes with all the same accessories: Nick Fury's pistol and AR-M9F, and Hand ninja swords. There are no fun bits of Deadpool graphitti on the weapons this time.

Since ML3 doesn't have a Build-A-Figure (it's just a filler series of repaints), the figures instead come with one of the Heroscape bases, like the Avengers and Amazing Spider-Man have. Considering that they're completely modular among all the lines, we're really liking this trend. The ML bases are darker than the ASM ones, but lack the A logo of the Avengers ones.

X-Force Deadpool makes a nice addition to the ranks, even if he is just a repaint. It may be time for me to sell off my red two-pack Deadpool, now. 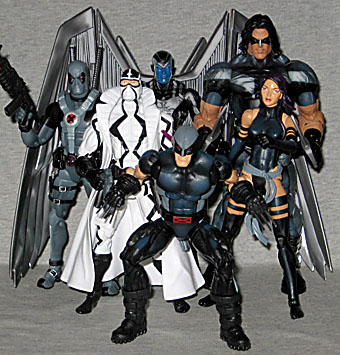