Remember how hard some of the "Reveal the Shield" Legends Class figures were to find? Megatron, Goldbug, guys like that? Well take one of the already difficult-to-find figures, give him a new paint app to turn him into a new character, and make him a Chinese exclusive, and you have a recipe for true frustration. Luckily, Toys Я Us was looking for some TF product for the Giftsmas season and ended up importing a bunch of the figures. 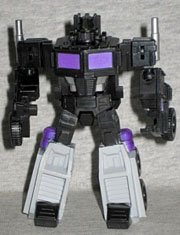 The troops under his command hate Motorbreath, but they fear him more. The same could be said of many Autobots. The cruel warrior delights in nothing so much as the tortured screams of an enemy's chassis being blasted apart by his cannons.

Motorbreath, here, is clearly a "naming rights" version of Motormaster. He certainly retains Motormaster's dickish personality, if the bio text on the card is to be believed. He's hot and he's heavy and dirty and mean: it's how he lives his life; he can't take it any other way.

The figure is clearly a repaint of Optimus Prime, 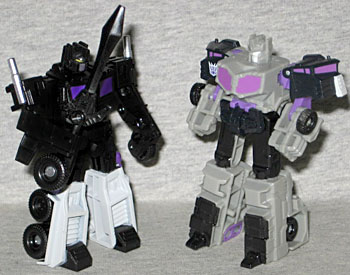 who was, as mentioned above, not an easy figure to find. There's truck kibble on his arms. More than usual, I mean. He's looking pretty snazzy with his all-black upper body and pale gray legs. A little bit of purple is used for accents. The hips and elbows are balljoints, the shoulders swivel, and you can turn his torso a little bit if you're so inclined. All these exclusives come with new weapons: Motormaster's is a surprisingly accurate, scaled-down version of the ionizer sword the G1 toy came with. The sword is 2" long, and the toy's hands have been remolded to hold it.

When you first go to convert Motormaster, you'll find you're unable 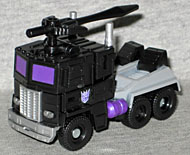 to move his head - there's a tiiiny plastic spacer jammed into his torso to keep the head from falling down while in the package. That seems excessive. Anyway, the conversion has no surprises, other than the fact that you swing his chest around. It's kind of neat how he goes from "black grill against silver" in robot mode to "silver grill against black" in the vehicle mode. Four of his six wheels roll, and the sword can be plugged into the roof of the truck for storage. Yes, it's weird, but pretend it's a fancy antenna or something. Or just don't plug it in.

These repaints were originally announced as being only available in the Asian market, so some fans call them "GDO" (or "Generations Deluxe Overseas") Exclusives, but also apply the label to Legends, Scouts, Voyagers and Leader Class figures, so the whole "Deluxe" part doesn't make much sense. As one reader quipped, just call them Asian Generations - or "Generasians!" Ha! For a while there repainted Primes that were clearly meant to be updates of Motormaster were named Menasor, after the gestalt he and the Stunticons formed, so it's nice to finally get one that at least comes close to his real name. If you can't find Motorbreathmaster at TRU, HasbroToyShop is also offering him in a four-pack with two Deluxes and a second Legend.

This entry was posted in blog exclusive review, Hasbro, videos and tagged Transformers. Bookmark the permalink.