This blazer-wearing boy wonder likes looking in the mirror almost as much as he likes racing. Rancis Fluggerbutter may look like a party on the outside, but he's all business on the inside. He has bright eyes and even brighter ideas, which are reflected in his smooth racing techniques.

It's a good thing Disney's official Wreck-It Ralph site had

a bio for Rancis, here, because the kids' personalities as communicated in the movie were basically "standing." Yes, their personalities were a verb, not an adjective. And not even an action verb, a passive verb. And they all have the same one, because none of them are distinct. Rancis is one of only three boys in the game (along with Gloyd Orangeboar and Swizzle "The Swizz" Malarkey), but he still looks like the Singing Telegram Girl from Clue (who, by the way, was played by Jane Wiedlin of The Go-Go's) - he even has the same haircut with the swirled bangs! It doesn't help that the toy paints his jacket red instead of orange-brown. 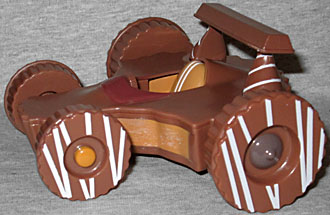 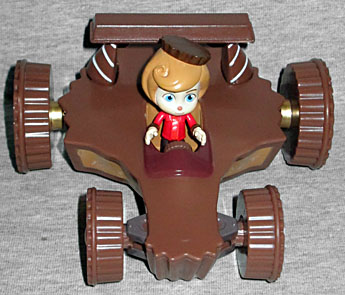 The Kit Kart is easily the widest of the Sugar Rush cars: it's 4½" wide, 2⅛" tall, and 4⅛" long. Rancis fits well behind the wheel, almost sitting like a normal human being. These drivers are humans, right? Near enough. While all the Sugar Rush designs are neat, it was specifically this one that made me want the whole set when I first saw it. But I didn't actually want to pay for them, which is why I asked for them for Christmas (reviewing 12 items takes a long time when you only do it once a week). 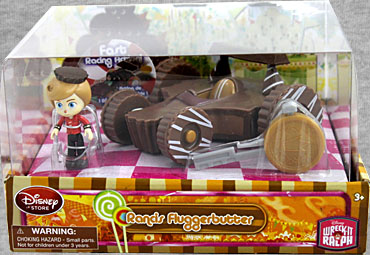 the toys well. The entire top is clear, allowing full views of the car and the figure (as well as the golden coin key). The bottom of the display is pink and white checkerboard, showing the start/finish line, while the back shows some of the grandstands - most of the sets show three sets of stands, but this one only shows two: Rancis's own peanut butter cups (which don't appear on any other boxes) and the gumdrops that are marks for Minty Zaki. This is a really lovely display, perfect for MOC collectors.