Snow White went through a lot of different versions before appearing in Walt Disney's first feature-length animated film: her hair changed style and color and length, the animation style went from traditionally 1930s "rubber hose" to almost rotoscoped, her age fluctuated up and down (from a totally innocent 7-year-old [too young

to fall in love with a prince] to a mature adult [too aware of her own beauty]) before settling as the young teenager we've always known. And since Snow White predated the concept of unified colorschemes planned out before any work on the movie is even begun, it took a while for her clothes to get their familiar look, as well.

For Wreck-It Ralph 2, Snow stays close to the classic colors, but doesn't copy them exactly. Her top is still blue, an off-the-shoulder shirt, but rather than a yellow skirt, she's wearing chartreuse jeans. On this toy, they're simply polka-dotted, but if you look at the film, those "dots" are actually meant to be apples. It fits her theme. Unlike Anna and Elsa, her shirt's design was pretty much set from the start - it was just a question of which apple design they'd use: one with a bite out of it that said "Bad Apple," a skully version that said "Fairest One," or one that just said "POISON," promoting the fact that she's got a big butt and a smile. Her bra straps are sewn as part of the shirt, and it, the pants, and the green flats she's wearing on her feet can be removed and traded with any of the other dolls in this line. She even has an accessory, based on a trimmed scene in the movie: while talking to Vanellope, Snow reveals that she's legally blind; that's why she always looks so surprised. Anyway, she comes with a pair of glasses rubberbanded to her hand, and they fit perfectly onto her face. 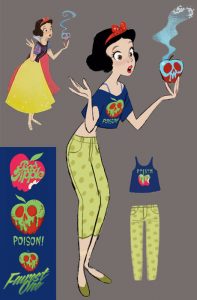 All the Comfy Princesses have the same joints: balljointed head, swivel/hinge shoulders and elbows, swivel/hinge hips, and knees that are ratchet joints inside a rubber sleeve, making the legs seamless. Rubber ankles mean they're very hard to stand, though. The hair is rooted, and shaped to match the style seen in the film.