Here's a Hasbro press release, pared down to the actual news: 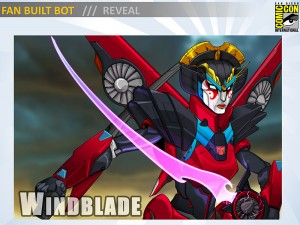 San Diego, CA – July 18, 2013 – [...] Hasbro announced the result of the first "Fan Built Bot Poll." Hosted earlier in the year, the poll asked fans around the world to vote on a series of TRANSFORMERS character elements such as faction, personality, vehicle mode and more. Hasbro combined all of the winning elements and unveiled the newest character to be incorporated into TRANSFORMERS lore and will be made into an action figure, part of the "Thrilling 30" line of numbered figures. The character is WINDBLADE, a female AUTOBOT jet who will appear in the "Thrilling 30" numbered line. The WINDBLADE character will make an appearance in future IDW comics as a lasting part of TRANSFORMERS lore with the opportunity to appear in additional brand expressions in the future. The WINDBLADE character action figure will be #30 in the "Thrilling 30" line and becomes available in late 2014.

And so on in that fashion.

Windblade! A female Autobot jet! With a kabuki-influenced design! Congratulations, fellow fanboys: we didn't F this one up!

This entry was posted in Hasbro, news and tagged Transformers, Windblade. Bookmark the permalink.