A Marvel by any other name

Despite the ire it riled among some fans, Captain Marvel becoming Shazam is just the latest installment in a long tradition of naming issues that surround the character. 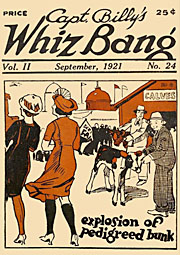 In 1919, Wilford H. Fawcett began circulating copies of a new magazine he'd created. Fawcett had been a captain in the US Army during World War I, and started by pedaling the mag to wounded veterans and his friends - to help sell it, he put his name and rank right in the title: Captain Billy's Whiz Bang. The magazine was rather bawdy, with off-color jokes and racy poetry that pushed the standards of the day. Think of the way self-appointed "moral guardians" reacted to South Park in the late '90s, and you'll get the picture. Captain Billy's Whiz Bang even gets mentioned in "Ya Got Trouble" from The Music Man:

That shows just how dangerous Captain Billy's Whiz Bang was, since The Music Man is set in 1912 (seven years before the magazine debuted). It's so awful, its subversive nature travels backwards in time!

Anyway, the magazine was so successful that it launched an entire publishing company, Fawcett Publications. They did all sorts of books and magazines, and eventually got into comics. When it came time to create their first superhero, they paid homage to the company's founder by including "Captain" in his supranym and "Billy" in his secret identity.

The original plan for the character was to call him "Captain Thunder," named after the sound that would accompany his lightning bolt transformation, and he would have appeared in Flash Comics - in fact, an ashcan comic with those names was released 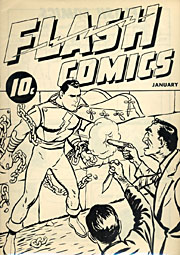 in January 1940! But that same month, All-American Comics (one of the three separate companies that all operated under the "DC Comics" banner in the Golden Age) used the title Flash Comics for a different character. Fawcett then tried to get the name Thrill Comics, but Better Comics was already publishing Thrilling Comics, so that name was out, as well. Meanwhile, the publishers decided that the name "Captain Thunder" was off-putting, so a brainstorming session was had to come up with something new. Artist Pete Costanza came up with the name "Captain Marvelous," but that was too long to fit in the already-drawn word balloons, so they shortened it to just "Marvel." And since the actual book still didn't have a title, they just went back to Captain Billy's Whiz Bang one more time, and settled on Whiz Comics. They then published their first issue as Whiz Comics #2, and later had two different #5s to get the numbering back on track.

So considering Captain Thunder, Captain Marvelous, Flash Comics, Thrill Comics and a numbering sequence that started at two and then went three-four-five-five-six-seven, DC switching the character from a name they can't use to a name they can use doesn't seem so incredibly out-of-place.

This entry was posted in addendums, comics, DC, videos and tagged Shazam. Bookmark the permalink.