In today's Superman vs. Zod review, I said that there was no way millions of people died in Man of Steel. Go-go-gadget math skills! 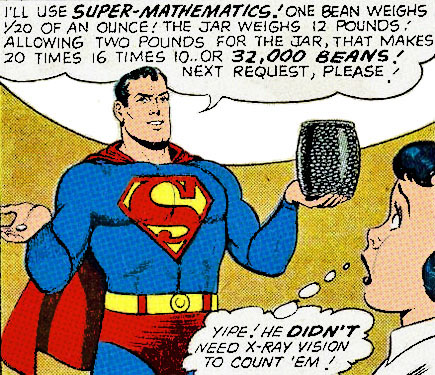 Let's assume that Metropolis is roughly equivalent to New York City. NYC has a total population of 8.3 million people, and 1.6 million of that number live in Manhattan. Manhattan is the "business" district, the equivalent of the area where the Kryptonian ship lands.

Judging by the clothes people are shown wearing, the movie takes place during the summer. When the ship arrives, we can clearly see the position of the sun and, using the "15-minute finger estimate" technique we all learned from Bear Grylls on Man vs. Wild, we can tell it's about half an hour to 45 minutes before sunset. In the summer, that means the time was approximately 8pm.

While "millions" of people may work in the center of the city during the day, they all go home at night. In fact, the movie specifically shows people commuting away from downtown. Even if, for some reason, the citizens didn't begin evacuating as soon as the big scary ship got there, the population was already far lower than it would be at its daytime peak. (Yes, it was about 10 minutes before the Daily Planet staff left, but they're newsmen: it's their job to stay as long as possible.)

Yes, there were people who were immediately at the epicenter and were thus unable to escape. And yes, they died. We're not saying that no one died in Metropolis, we're saying that "millions of dead" is a stupid exaggeration with no basis in reality.

Since Man of Steel's detractors keep comparing it to 9/11, let's look at those numbers. It was a truly horrific event, and 2,600 people died in the seven World Trade Plaza buildings that went down - an average of 371 people per building. At an average of 371 casualties per building, Man of Steel would have had to destroy nearly 22,000 buildings to reach the mythical 8 million people! Do you know how many actual building there are on the island of Manhattan? Not "taxable lots" (which include things like vacant lots and individual condo units), but real buildings. Apartment blocks, offices, garages, etc. How many are there? About 50-60,000. So to destroy 22,000 buildings, the movie would have had to destroy half to one-third of all standing structures in Manhattan.

Like a friend of mine said, "I don't know how many buildings were actually destroyed in the film. I wasn't counting, I was enjoying the movie. I didn't know there'd be a test after." I didn't count either. But when we see an aerial view of the city, there are still buildings standing approximately two blocks away, so let's say they got everything in a four-block diameter.

In Manhattan, north-south blocks are approximately 20 to a mile; east-west blocks are approximately 10. That means a square mile in Manhattan contains 200 blocks. We know Manhattan is 23 square miles, so that's about 4,600 blocks on the island; if the 60,000 buildings were distributed evenly, there would be 13 buildings per block; a circle with a two-block radius would contain 12.5 blocks, or 163 buildings. If there are 371 average deaths per building, that would mean 60,473 deaths - a truly mind-numbing number of dead Metropolites, but nowhere near the "millions" claimed.

Of course, you might add some more from Clark and Zod's fight (12 more buildings - yes, I counted), but most of those buildings were visibly empty. You could maybe push the total to 61,000. Now, that's still about 61,000 more deaths than I'd want to see Superman allow, but this movie wasn't about Superman - it was about Clark Kent becoming the man who won't allow 61,000 deaths to happen again...

This entry was posted in addendums, comics, DC and tagged SDCC 2013, Superman. Bookmark the permalink.