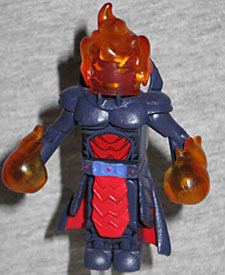 Master of the Dark Dimension, the Dread Dormammu has crossed over to the real world in hopes of conquering it. Among his many abilities are matter transmutation, interdimensional teleportation, size and shape alteration, element control and telepathy.

Look, it's a villain for Dr. Strange to fight, and we didn't even have to resort to HeroClix to make it happen! He gets the flame-head and -hand pieces from so many Human Torches, and is wearing his modern red and purple armor thanks to a new skirt and spiky shoulder pads. The set includes a flight stand, so he can hover above his foes. His head is translucent orange, and his face is painted in red.

Originally created by a demon in order to lure Dante into a trap, Trish worked side-by-side with him and fell victim to his charms, ultimately betraying the demon world. Now she works together with Dante as his 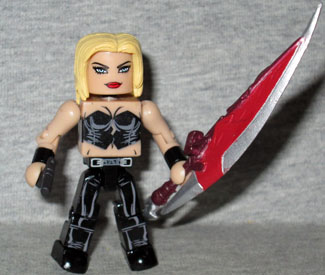 It's a good thing there's a bio on the packaging, because otherwise I'd have no idea who Trish was. Dante I'm familiar with, but as far as I knew, Trish was just some biker chick. She's got leather pants, leather boots, leather bracelets, a leather choker, and a leather bustier. She's a white trash valkyrie straight from the edge of ruin! She's armed with a black pistol and the Sparda sword. What's a Sparda sword, you ask? Well, it's a big, wicked-lookin' scythe thing, what more do you need to know? Pretend it's the Soul Blade for all anyone cares. In a nice move, the blade can plug into a hole in her blonde hair, as though she's carrying it on her back.

This entry was posted in Art Asylum, Marvel, MMMR and tagged Capcom, Minimates. Bookmark the permalink.