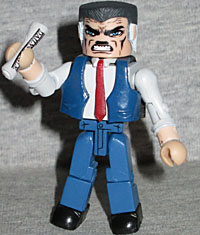 As the publisher of a major metropolitan newspaper, the Daily Bugle, Jameson's primary concern is to sell papers, and photographs of Spider-Man usually do the trick. Too bad he doesn't see Spidey for the hero he is!

It's a little bit weird that Jonah is included in this series, based (as it is) on "The Death of Jean DeWolff" - yes, he's in the story, but it's (eventually) a pretty important plot point that he's out of town. Eh, doesn't matter, this is our first real J. Jonah Jameson Minimate, with the only other choice being the Series 7 Chameleon variant. 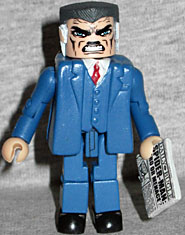 Straight from the box, JJJ is in his shirtsleeves. He's wearing the same vest as the Mayor, and has the Spirit's

necktie. Here's a cool little detail: the front of the vest is blue, while the back is black, as though it were made from two different fabrics. If you want him to have a more professional look, the set includes a suit jacket chest cap and matching blue arms. The coolest part, though, is that he includes two copies of the Daily Bugle: one rolled up, and the other merely folded over. The folded ones has headlines about Spider-Man and Tony Stark (as well as tiny, tiny text in the stories). 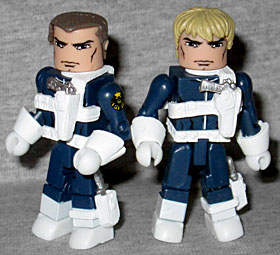 reacts to threats around the world in their flying helicarrier.

Yes, the Ultimate SHIELD Agents were nice, with their generic soldier uniforms, but this is the classic! A navy blue jumpsuit with bright white accents! It's got flared gloves and a utility belt that we've seen before, but the piece over the chest, with the holster and all the pockets, is new. The SHIELD Agent comes with a silver pistol and a knife that fits in the sheath on his boot. So you can create different looks, there are two hair pieces: a brown crew-cut and a shaggier blonde mop (which we like to pretend makes this a Minimate Clay Quartermain).

Of course, you know what it means when one figure in a package is an army-builder with two different looks: there's a variant! 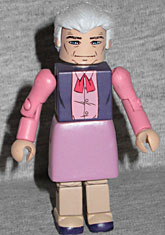 took the boy in after his parents died when he was a child. She is unaware that Peter is also the hero known as Spider-Man.

So for this set, J. Jonah Jameson has been replaced by Aunt May - talk about opposite ends of the emotional support spectrum! We've had a movie-based Aunt May, but not one from the comics. She gets a new hair piece, with the typical comicbookish bun in her hair, and has a purple vest over a pink dress. Her legs are slightly darker than her hands and face, suggesting hose, and her shoes match her top. Although Aunt May isn't a huge part of the Jean DeWolff Saga, it doesn't matter: getting a toy of Peter's aunt is just too cool!

In fact, even if you don't care about Jean DeWolff at all, both versions of this set are aces! Jonah, Aunt May, a couple of SHIELD Agents... good stuff!