It's amazing what a difference a little bit of plastic can make. 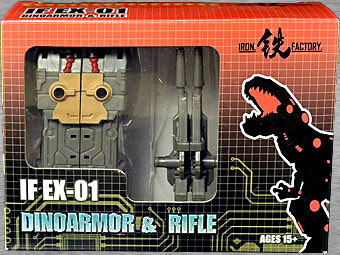 I bought Fall of Cybertron Grimlock in October of 2013, and reviewed him that Smarch. But I still haven't thrown out the packaging, because I was sure I was eventually going to box him back up and take him back to the store. Yes, it's currently July; what's your point?

Anyway, I remained stone-cold certain that I was one day actually going to stop being lazy and get my money back for the toy. And then I learned about Iron Factory's "EX-01 Dinoarmor & Rifle" add-on set, and that plan went right out the window.

The set provides exactly what it says on the tin: armor and a gun. It doesn't sound like much, but it does the job it needs to. You'll recall that 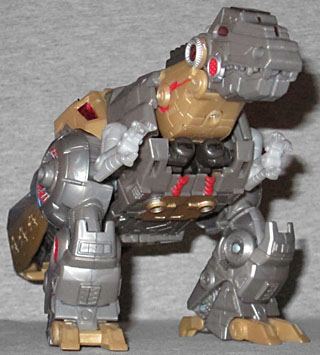 the major flaw with FoC Grimlock was that the designers apparently forgot these things exist in three dimensions, not just two, and consequently left a giant, exposed hollow under the T-rex's body. The armor instantly fixes that. There are two tall prongs that slide effortlessly into square holes on either side of the robot's head, tucked away inside the dinosaur the way it is. The plate stays on securely, and blends with the existing toy wonderfully. The colors are a little bit darker, but not so much that you'd notice.

The absolute best part about this set is that you can still convert Grimlock without having to remove it. Getting the dino hips to pop out is a little bit tough, but it can be done. So once the set is in place, you never need take it out again (not that it's permanently attached - but you could glue it if you were so inclined). 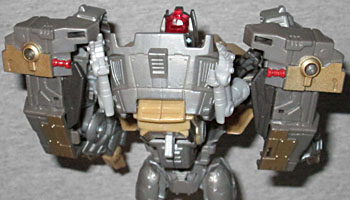 In robot mode, the armor splits in half and folds down to become unobtrusive flaps that hang behind his arms. In order to do this, the plates are mounted on articulated arms (two swivels and two balljoints) that swing them out to the sides. It's an impressive design which, again, allows the toy to retain its full range of intended functionality with no alterations. That can't have been easy.

For those who demand a more slavish devotion to Generation 1, the EX-01 set also includes a few extra pieces that allow you to make the robot mode more retro: two little nubs, and two short arms with balljoints at one end

and sockets at the other. These allow you, instead of moving the parts around smoothly, to deconstruct everything and then reassemble it. Basically, you take the T-rex arms off, attach them to the short pegs, which then plug into the holes on the armor; then you take the short sprues and plug them on where the dino arms used to be, and pop the armor plates off the balljoints that usually hold them. Doesn't that rather defeat the purpose of all the smart work they put into the design? It's like the downgrade kit for Blitzwing: crippling something new in service of looking old. 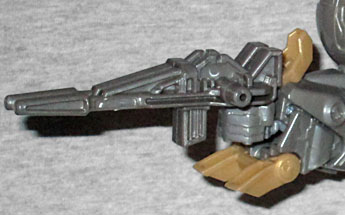 By contrast, the gun looks old, but still has new functions. It's patterned after G1 Grimlock's "twin stunner laser," but not a direct copy. Plus it splits in two so it can plug into the dino's hips/robot's shoulders, so he can use it in both modes.

Honestly, I could do without the gun. I could do without the extra little bits. I could even do without the way the armor splits apart and moves around on the robot. Honestly, all I wanted was something to cover the horrible gap under the toy that Hasbro should have had the common sense and pure level of skill to never leave there in the first place. Just make it a plain damn shield and have him hold it in his hand when he's a robot, and I would have been happy. Iron Factory's "EX-01 Dinoarmor & Rifle" add-on set goes above and beyond those requirements, but it also doubles the price of the toy. The thing is, Grimlock is so! Much! Better! with the armor in place than he was without, that I'm glad I bought it. Think about that: spending the extra $23 on this set made me glad I didn't get my $25 back from the store for Grimlock. If that's not a mark of quality, I don't know what is. 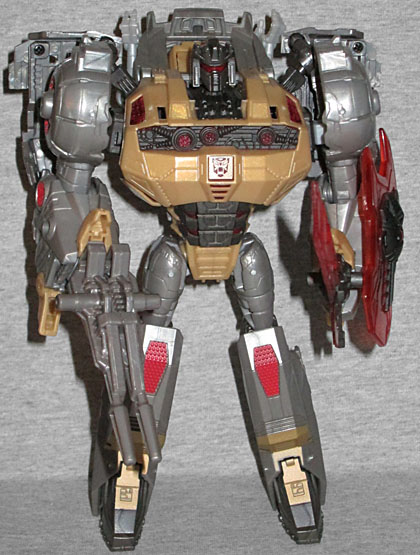 This entry was posted in blog exclusive review and tagged Transformers. Bookmark the permalink.