Abel was created as a replacement body for M. Bison. He was discarded 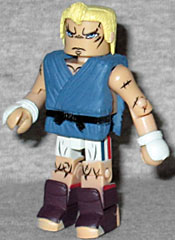 as a faulty product, but he managed to survive and now hunts the Shadaloo organization to find out the truth about his past.

Wow, M. Bison wanted to look like this? Or is the appearance what marked this clone as "faulty"? I mean, he apparently doesn't know how to finish dressing himself, because he's wearing the top of a blue gi, but he seems to have forgotten his pants. White bike shorts with stripes on the outsides of the legs don't count. He has new feet with short bootfronts attached, and is wearing white fighting gloves. His face, chest and arms are painted with scars, and his new blonde hair has a weird little bouffant in the front.

A cold-blooded killer who has awakened the power of the devil, Kazuya 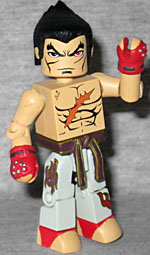 is an arrogant and brutal man, and has fought countless times against both his father, Heihachi, and his son Jin.

I don't know much about Tekken, but I know the dude with the armored red gloves is the main character. But judging by that bio, he's also a villain? Weird. He has massive scars on his chest and back, from the time his father threw him off a cliff when he was a child, and his left eye is red (to signify the power of the devil inside him). His belt is a new piece, as are the gloves. His pants are a pale gray, with flames on the left shin and right hip. His hair, with its ridiculous ducktail spike in the back, is obviously not a piece that could be reused from anyone else.
Previous | Next