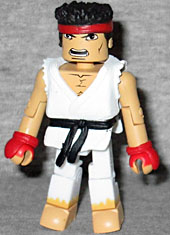 Ryu is a wandering street fighter who trains constantly in order to become a true martial artist. He wishes to test his mettle against fighters around the world and seek answers in the heat of battle.

This Ryu is 99% identical to the Marvel vs. Capcom Ryu - same hair, same gi, same gloves, same paint masks. The only thing that's different is the face: the MvC one had his mouth closed, while this one has his mouth open. He also doesn't have his hadoken effect. So we get our sixth Ryu, but still no Blanka or Dhalsim or E. Honda or even a Dan. "Yay." 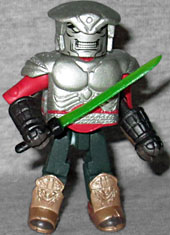 The mysterious head of the Manji clan, Yoshimitsu steals from evil companies and spreads their wealth to the poor. Although he has a serious temperament, he also shows flashes of stupidity.

Wait, the demon-robot is a good guy? Again I say what the hell is going on with this game?! His boots, gloves, chest cap and mushroom-shaped brain are new pieces, and he's armed with a green sword. He has a creepy smile painted on his silver face, and there are ornate patterns painted on the outside of his legs. Yoshimitsu has had a lot of different looks over the years, but this is definitely the most famous one.
Previous | Next