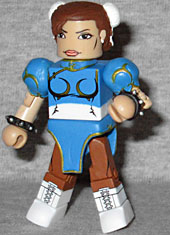 Chun-Li is an Interpol detective, tracking the Shadaloo organization in order to learn the truth about her father's whereabouts. She stands firm against the forces of evil, and her kicks are devastating.

"What makes this Chun-Li different from the Marvel vs. Capcom Chun-Li," we hear you asking. Well, this one has a more detailed face and a less detailed body. Yep. They have the same skirt, same wrist bands, same poofy sleeves, same molded collar, and same ox horn hair piece - it's just the details of the paint that set them apart. This one doesn't even have the benefit of a "flip" stand to re-create her special moves. Or the benefit of coming with She-Hulk.

Despite his cool composure, Hwoarang is a hot-blooded man, always 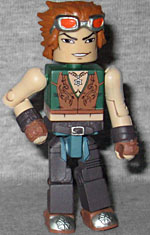 looking for a good fight. In the past, he used to hustle people into street fights, but he now trains under the guidance of Baek.

Hwoarang brings us a member of a surprisingly under-represented group in fighting games: yaoi boys. Wait, no, that's not right. Tae kwon do! That's what it is, he's a practitioner of tae kwon do. A practitioner of tae kwon do with spiky red hair held back by goggles on his forehead, wearing a belly-baring green and brown vest, blue jeans, chaps, and silver-toed cowboy boots. His hair, belt, boots and gloves are new pieces - the boots even have spurs on the heels! There's some kind of skull design painted on his back, and a necklace on his chest.

Just as with Series 1, there are six total two-packs in Series 2: two exclusive to Toys Я Us, two only available through the direct market, and two available everywhere. Sure enough, the two sets featuring women were the direct-market-only ones, which is kind of nuts: Chun-Li, at least, is one of the most famous characters in the entire franchise - famous enough to have her own (terrible) movie - so you're saying she doesn't deserve a mass release just because she's a she?
Previous