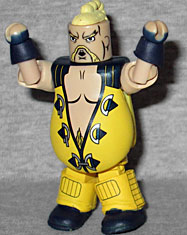 An American fighter, Rufus can move with unimaginable speed, despite his size. He often ignores his opponents during a match to heap praise on himself, and views Ken Masters as his bitter rival.

Oh of course the monstrously fat idiot is an American. Why wouldn't he be? Allegedly Rufus was, like Crimson Viper, designed specifically to appeal to American gamers. That's why he has his hair done up in some kind of braided topknot thing, and is wearing a black and yellow bodysuit that refuses to close over his gut. Because that's the kind of thing we love. There is padding painted on his pants, and he uses Captain America flares to create his elbow-length gloves.

As a young child, Julia discovered the ruins of an ancient civilization.

Now, this nature-loving woman fights for what she believes in with Chinese Kempo and approaches every situation with careful judgment.

Tekken has had a sexy indian girl since the first installment, but this isn't her - there was a 15-year timeskip between Tekken 2 and Tekken 3, so Michelle was replaced with her daughter, Julia. Julia Chang, for some reason. Juila Chang, who sometimes poses as a luchador. What the hell is going on with this character?! She's certainly dressed like a sexy indian (or at least, like a "sexy indian" Halloween costume), with cowboy boots, a denim miniskirt, buckskin crop top, leather wristbands over her gloves and a golden armband. Her hair is pulled into two braids, and includes a headband with a feather coming up off the side.
Previous | Next