Iron Man 3 introduced 35 new suits of armor, each with its own cool design. The Iron Man 3 toyline, however, turned almost none of them into figures. How do you drop the ball that badly? Thankfully, the Minimates at least did some of the armors.

Since the alien invasion that wrecked Manhattan, Tony Stark has withdrawn 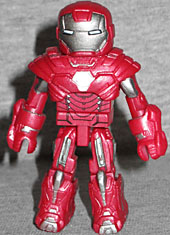 to his workshop, developing different iterations of the Iron Man armor for every possible scenario. The Silver Centurion is one of them.

This is technically the "Enhanced Energy" armor, which has a magnetic forcefield and the wrist guards slide back to reveal pulse cannons. The Minimate does a superb job with the armor - this isn't just a repaint that looks kind of like the movie armor, we actually get a bunch of new molds to make it as accurate as possible: the boots, thighs, gloves, upper arms, chest cap, and helmet were all created specifically for this Toys Я Us exclusive! Even the paint masks on the chest, waist and back are unique for this toy. If they redid this figure with blue instead of red, it would be a perfect match for the Mark 30 "Blue Steel" armor. 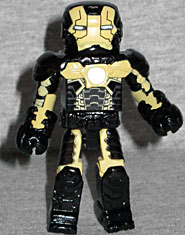 is designed to operate in a particular environment or deal with a specific threat. In addition, each can now be operated without a human pilot.

The Skeleton Armor is the movies' version of the Modular Armor: indentations and open areas in the suit allowing interlocking pieces to fit into place and function seamlessly. Since the Silver Centurian armor had so many pieces, it's understandable that this one is just a straight black-and-yellow repaint of the Mk.V Minimate, meaning he gets boots, gloves, a belt, a chestcap and a helmet, plus non-standard thighs and biceps. It's not a perfect match, but it's close enough to be recognizable.

Both these figures have removable helmets, showing the same Tony face underneath. The only difference is that the Silver Centurion head has his mouth open slightly, while the Skeleton Armor head just frowns. They both have identical hair.
Previous | Next