Since the alien invasion that wrecked Manhattan, Tony Stark has withdrawn to his workshop, developing different iterations of the Iron Man armor for 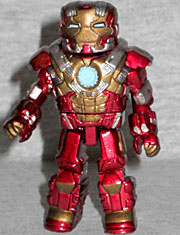 every possible scenario. The Mark 17 "Heartbreaker" armor is designed for artillery.

More accurately, it's designed to deflect artillery. The repulsor in the center of the chest is larger than usual, because it can either fire a normal beam or power up for a stronger blast - and like the spray on a hose, it can be adjusted from a straight shot to a wide spread. The chest cap and and waist are new, and their sculpts match up nicely. We also get new boots and gloves, plus unique thighs and biceps (though AA totally could have repainted this black as the Mk. XVIII "Casanova" or gold/brown as the Mk. XXIV "Tank" armor). The new limb pieces are thick enough that the elbows and knees don't bend as far as usual. Under the helmet is a Tony Stark face, and there's hair included so he's not bald. 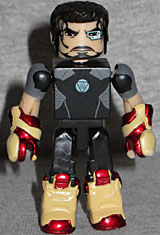 technological feature. Operated by synaptic link, the individual components of the suit are independently mobile, and can fly to the user with just a mental command.

At last, a toy that doesn't claim Tony can control all his armors because of the Mark 42! Hooray! This is "dicking around in the basement" Tony, wearing the headset eyepiece that he only wore while he was making the empty armor interact with Pepper. He's got his black and grey T-shirt with the light from his repulsor shining through, and is wearing the boots and gloves from the Mark 42 - in Toys Я Us yellow, rather than specialty market gold - but includes plain hands and feet if you want him to look like that, instead. Well, one of the hands is painted with a bandage, but it's still the normal sculpt.
Previous