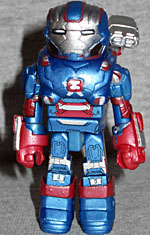 Tony Stark allows one Iron Man armor to be used by the US military under the auspices of his close friend James "Rhodey" Rhodes. But a new, media-friendly paint job doesn't mean a thing if the suit once known as "War Machine" is compromised.

Usually with their Marvel Minimates line, Art Asylum releases three two-packs and one variant. But Series 49 changed things up a bit. Iron Patriot uses all the same new molds as War Machine - helmet, chest cap, upper arms, gloves, boots, and back-mounted cannon - so you'd think one would be the variant of the other (especially since IP comes with an army-builder), but nope: they're both unique offerings.

Like the bio intimates, the reasoning behind War Machine being repainted and rechristened Iron Patriot was purely to do with PR. Public relations, not Power Rangers. The world saw superheroes, not the military, successfully defend New York from aliens, so the armor was redone to look more superhero-y. You can remove the helmet and chest cap to see Rhodey's face and more tech detailing, respectively.

But not always Rhodey's face! As you'd already know if you saw Iron Man 3 when it came out over a year ago, the suit gets taken over by Eric Savin, a completely forgotten character from the comics named Coldblood. So this set includes a second head representing James Badge Dale, an actor who's been in lots of things you've seen, but not that you'd recognize.

The Extremis formula rebuilds the body from the ground up: replacing 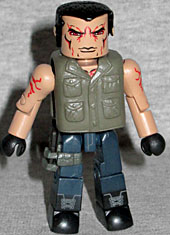 organs, strengthening tissues and turning each subject into a living power plant. With super-strength and incendiary attacks, one Extremis enhancile is more than a match for any Iron Man armor.

Savin wasn't the only Extremis Soldier in the movie with comicbook roots: Jack Taggart (the one from the Chinese Theatre) was a guy named Firepower, while Ellen Brandt (the one in the diner) was Man-Thing's wife. This Minimate doesn't represent either of them, though: it's clearly one of the nameless minions, wearing dark pants, military boots, black gloves and a dark green vest. He's armed with a gun, but his real power is the Extremis energy glowing through his skin (in very precise, straight lines).

It's a bit weird that Iron Patriot and War Machine aren't variants of each other, because the Extremis Soldier is clearly an army-builder. The face is generic, and the set includes a second piece of hair you can give him. It's suspiciously the same color as Aldrich Killian's hair, though a different cut. You can also remove the vest, to show more red lines of power (and if this was supposed to be Killian, he'd have his Fin Fang Foom tattoos).
Previous | Next