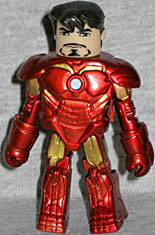 Six months after battling Iron Monger, Tony Stark continues to don the Iron Man armor despite the consequences of revealing his secret identity to the world. Though clearly dedicated to his cause is the world ready for Iron Man?

There's not much for me to say about this Iron Man - not that it's bad, it's just that I already reviewed this mold in the form of the Borders-exclusive Hangover Tony Stark. The only difference - the only difference - between that figure and this one is the design of the unmasked head, and even then, all that means is this one doesn't have sunglasses; other than that, the paint apps are identical. Same frown, same shape beard, everything. The set includes hair, hands, and open and closed helmets for him.

The son of the brilliant Russian scientist, Ivan Vanko uses his father's research and designs to create his own high-tech armor and finally compete directly 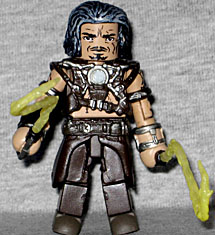 against Iron Man as Whiplash!

The Iron Man in this set may be a rehash, but Whiplash isn't. The other one was battle-damaged, while this one is pristine - or at least, as "pristine" as a character played by the living five miles of bad road named Mickey Rourke can possibly be. His harness is an incredibly detailed new piece, he has the torn remains of his jumpsuit around his waist, and gets new rings around his upper arms. Instead of normal hands, he gets big glove dealies that are hand, handle, and brace, all in one. The hair is the same piece used for the other Whiplash, but on this one the mouth is closed. He comes with two translucent yellow whips that plug into the hands. 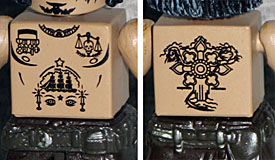 You can remove all the surface pieces if you just want to have a shirtless Ivan Vanko. He has all the same painted tattoos as the battle-damaged figure, but since his harness comes off you can actually see them all. The set includes a pair of plain hands to replace the mitts, because he'd look silly otherwise.

The Iron Man in this set is great, if you didn't get the Borders exclusive (hey, remember when Borders used to be a company that existed?), but the Whiplash is good no matter what.